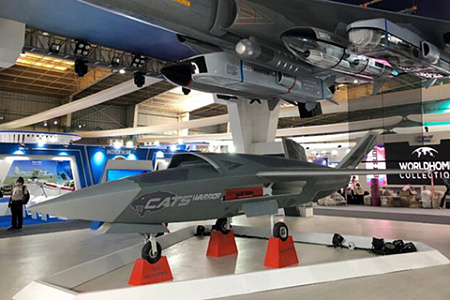 The slogan Make in India is still only a slogan

India is committed to demonstrating its commitment and ability to create a wide range of unmanned aircraft systems of various types and classes. This impression was formed following the results of the next Aero India 2021 aviation salon held in Bangalore, India, in February. Models and prototypes of various UAV systems created by industrial companies of the country were shown at the event. At the same time, the main actor was the Indian state-owned aerospace and defense company Hindustan Aeronautics Limited (HAL).

The most high-profile unmanned premiere of the current salon in India was the display of a model of the promising "unmanned slave" Warrior. The project was presented by HAL. It is implemented within the framework of the concept of interaction between manned combat aircraft and unmanned aerial vehicles (Combat Air Teaming System – CATS) developed by the company.

The CATS concept implies that the Warrior UAVs will accompany the manned aircraft, closely interacting with them in a group and taking on the most high-risk tasks, such as opening the enemy's military and object air defenses and defeating the corresponding complexes, as well as other high-priority targets located at tactical and operational-tactical depth.

The main idea of the concept is that the manned part of the group will remain outside the detection and destruction zones of the enemy's air and ground countermeasures. It is assumed that this approach will allow, in addition to eliminating some of the possible risks for manned aircraft, to increase the effectiveness of combat aviation operations in general.

According to reports, the Warruior unmanned vehicle will have a maximum take-off weight of about 1300 kg. As a power plant, it will receive two turbojet engines that will provide the drone with a speed of about M=0.7. According to the developers, the maximum duration of the flight will be up to 80 minutes. The range is indicated at 800 km.

The drones must carry various onboard sensors, including an optoelectronic surveillance system and an onboard radar, as well as weapons weighing up to 250 kg. So, in the internal side compartments and on the external points of the UAV suspension, air-to-surface missiles can be placed, such as the promising Indian small-sized cruise missile SAAW (Smart Anti-Airfield Weapon), and the air-to – air class, for example, the Indian NG-CCM (Next Generation-Close Combat Missile) with an infrared guidance system. The weight and size characteristics of the unmanned vehicle suggest that it will perform take-off and landing on an airplane from airfields, probably simultaneously with the manned "partners".

It is assumed that the Warrior drones will be paired primarily with Indian Tejas MK1A aircraft. As an illustration of the application concept, they were shown together at the exhibition. In addition, the Mirage 2000 and Su-30MKI aircraft are also considered as the "leading" aircraft in conjunction with drones.

Another element of the CATS system is barrage ammunition. Against the background of the armed conflicts that have taken place in recent years, this area in the armed forces of many countries is seen as one of their priorities for development. This trend has not gone unnoticed by HAL, which is considering several configurations of the corresponding devices that have an air start.

At the salon, prototypes of barrage ammunition under the name Alfa-S were shown as an example. They are being developed by HAL in collaboration with a Bangalore – based startup, NewSpace Research and Technologies. The UAV is equipped with a straight wing with a span of about 2 m and a two-keel tail, the planes of which are pressed against the fuselage in the transport position and unfold into the flight position at launch. Unmanned vehicles are equipped with electric motors that provide them with a cruising speed of about 100 km / h.

It is assumed that a group of such kamikaze drones will be able to barrage for two hours, detecting various ground targets with their boron optical-electronic systems and hitting them with the help of combat units integrated into the design. At the same time, the entire group will interact closely with each other, implementing the concept of a "swarm" or "flock". That is, the ammunition will automatically distribute tasks among themselves, including taking into account the tasks set and the ability to reconfigure the group, detect and classify targets, rank them according to pre-defined criteria, and defeat them in accordance with the assigned priority.

Initially, Alfa-S barrage ammunition will be used from Hawk jet training aircraft manufactured in India under license. However, in the future, the goal is to provide the possibility of using barrage ammunition for a wide range of manned and unmanned carriers.

The addition to the unmanned slave Warrior is seen as a high-altitude unmanned vehicle of a long duration of flight Infinity. The name reflects the almost unlimited duration of the flight: the UAV must receive electricity from solar panels and accumulate part of it to ensure flight in the dark. The project of such an unmanned vehicle, often referred to as pseudosatellites, is also being proposed by HAL, also in partnership with NewSpace.

Like most stratospheric UAVs that exist in the world, Infinity has a large wing extension, on the upper surface of which there are solar panels. On the leading edge of the wing, several pulling screws are placed, driven by electric motors. As reported, the Indian stratospheric drone will perform flights at altitudes of more than 65 thousand feet (about 20 thousand m) with a maximum duration of at least 90 days.

It is assumed that the Infinity UAV should become one of the key elements of the Indian CATS system. It can be assumed that with the help of the relay equipment of communication systems placed on board, data exchange will be provided between the manned and unmanned aircraft involved in the framework of the concept, as well as other external consumers located outside the line of sight. In addition, equipping the Infinity UAV with various sensors, including a modern synthetic aperture radar, will allow you to track targets deep in enemy territory.

During the Aero India air show, HAL reported significant progress in the implementation of this project. According to the company's representatives, the Infinity pseudo-satellites may become available to the Indian Armed Forces within the next three to five years.

The device is made according to a single-screw scheme with a steering screw. The maximum take-off weight of the drone is 200 kg, including approximately 40 kg of payload. The UAV will be able to fly at altitudes of up to 6 km within a radius of up to 200 km. The maximum duration of its flight should be six hours. To equip the drone, several sensor payloads are created. It is possible that it will also be able to carry weapons, including a machine gun and / or ATGM.

Among the main tasks for which this UAV is intended, the developers call the reconnaissance of the battlefield, the detection and identification of ground targets, the determination of their coordinates and the provision of target designation for high-precision weapons, as well as the retransmission of communications. Potentially, such unmanned helicopters could be used as an aviation supplement to tanks, infantry fighting vehicles and artillery.

For the first time, the model of the device was shown two years ago at the last air show in India. At the same time, according to available information, work on the prototype began. The first flight of the RUAV-200 UAV is scheduled for late 2021-early 2022. At the same time, the RUAV-200 should become the first swallow in the family of unmanned helicopters that the HAL UAV R&D Center intends to create.

From heaven to earth

The surge in activity in the field of unmanned aircraft in India, noted at the last national air show, is primarily associated with the company HAL. The company's interest in UAV systems was not a surprise – at last year's DefExpo 2020 in Lucknow, the company announced its ambitions to develop projects in the relevant field.

This is due to the fact that HAL's orders for the production of fighters are drying up. For the company, the question of survival is the search for possible ways to diversify the business. And drones are seen as one of the most promising areas in the development of aviation. These circumstances led to the efforts made to create a full-fledged business unit in HAL, focused on the development of unmanned aircraft systems of various types and classes in the interests of the Indian Armed Forces and other law enforcement agencies of the country.

At the same time, it is worth noting that, despite the demonstration of grandiose plans in the field of UAV systems, most of the proposed systems are in the initial stages of implementation. Such large-scale high-tech projects are very complex and expensive. The slogan of Make in India in relation to them is very spiritual, but still largely remains only a slogan.

It can be assumed with a high degree of probability that a significant proportion of the announced projects will be implemented over the years. Impressive videos and equally impressive layouts will be displayed at the exhibitions, attracting the interest of visitors. Some samples may even go up in the air. However, the troops are likely to get systems developed abroad, as is currently the case. India is one of the long-standing, and largest, customers of Israeli UAV systems, and last year the country agreed with the United States on the supply of MQ-9B reconnaissance and strike UAVs.

Taking into account the above, the main opportunity to realize the ambitions in the field of development of the direction of unmanned systems, while following the declared course of developing its own production capabilities, will be the organization of joint enterprises with foreign partners to assemble unmanned systems of foreign design in the country with a certain degree of localization. Their own projects, which are being conducted in a sluggish mode, will only help in the negotiations, somewhat improving the contractual positions of the Indian side.

Realizing this, the same HAL last year announced strategic agreements regarding the production and promotion of unmanned systems developed by the Israeli concern Israel Aerospace Indisties. Presumably, this activity will include work on Heron UAVs used in the Indian Armed Forces. In addition, HAL also has partnership agreements with another major Israeli manufacturer of unmanned systems, Elbit Systems.

Denis Vyacheslavovich Fedutinov is an expert in the field of unmanned aircraft systems. 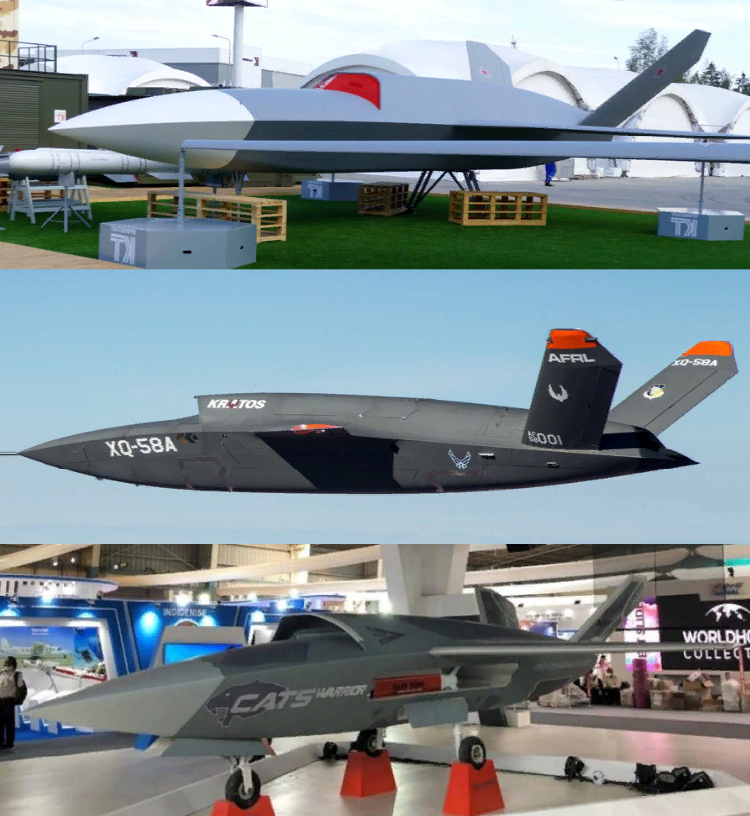