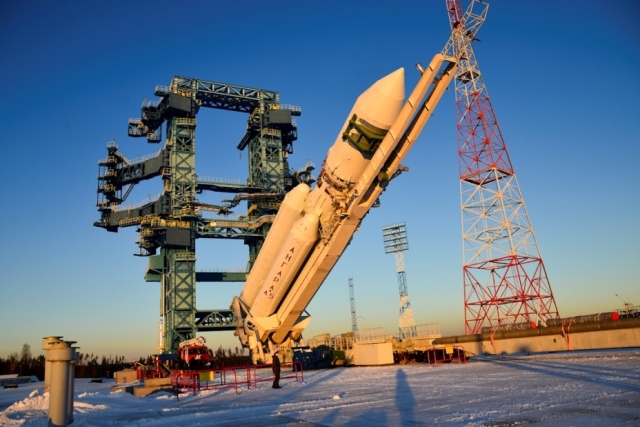 Earlier, the general director of the Khrunichev Center, Alexey Borochko, said that the third test launch of the heavy carrier rocket "Angara-A5" is scheduled for the second quarter of 2021

MOSCOW, February 6. /TASS/. The Khrunichev Center has received several orders for the launch of the Angara-A5 heavy launch vehicle, in particular for 2022. This was stated by the chief designer of NPO Energomash (part of Roscosmos), Pyotr Lovochkin, on Saturday in an interview with the program " Big Space "on the channel" Roscosmos TV " on YouTube.

"We very much hope that the fate of this rocket will be extremely positive, and I know that the Khrunichev Center already has a number of orders for launches next year and in the future," Lovochkin said.

He recalled that one of the significant events of 2020 was the resumption of launches of Angara missiles. "After a long break, the Angara-A5 rocket with RD-191 engines, which our company develops and produces, was launched from the Plesetsk cosmodrome," the chief designer said.

Earlier, the general director of the Khrunichev Center, Alexey Borochko, said that the third test launch of the Angara-A5 heavy launch vehicle is scheduled for the second quarter of 2021. The third heavy " Angara-A5 "for the first time should be launched with the upper stage"Perseus".

"Angara" - a family of Russian launch vehicles from light to heavy class. The new family uses environmentally friendly fuel components. The first two launches of the heavy "Angara" took place on December 23, 2014 and December 14, 2020 from the Plesetsk cosmodrome.

The engine with the use of new technologies

"Today we have come close and know how to make, use new materials, new technologies in the design of the engine. Today, we propose to combine all these technologies and make a demonstrator engine of these technologies based on the proposed solutions," said the chief designer of NPO Energomash.

According to him, the idea is presented in the corporation "Roscosmos" and supported by its General Director Dmitry Rogozin. "We are adjusting our application based on the results of the review in our department of withdrawal funds. In the near future, I hope, we will submit it for inclusion in the federal space program," he explained.

According to Levochkin, the company uses existing technologies, improves them and moves to a qualitatively new result, which will make the engines more reliable and cheaper.

NPO Energomash is the management company of the rocket engine building holding, which is being created in the Russian Federation, which, in addition to the parent corporation, includes PJSC Proton-PM (Perm), JSC Design Bureau of Chemical Automation (KBHA, Voronezh), Voronezh Mechanical Plant (VMZ), NIIMash (Nizhny Salda, Sverdlovsk Region) and OKB Fakel. In the coming months KBHM them. A. M. Isayev will also be eventually integrated into a single structure.

The rights to this material belong to ТАСС
The material is placed by the copyright holder in the public domain
Страны
Россия
Продукция
Ангара
РД-191
Компании
ВМЗ
ГКНПЦ Хруничева
КБХА
КБХМ Исаева
Протон-ПМ
Роскосмос
Факел МКБ
Энергомаш им. Глушко
Персоны
Рогозин Дмитрий
Проекты
2020-й год
Плесецк
Do you want to leave a comment? Register and/or Log in
Log in via Facebook
The Permanent Representative of the Russian Federation to international organizations in Vienna Ulyanov called the refusal of AUKUS to provide data on the union abnormal
The United States agrees with Stoltenberg on the inadmissibility of Russia's influence in the issue of NATO expansion
In the USA, they were surprised by the size of the Su-75
The National Interest (США): российский танк Т-80 — это не шутка
Korean aircraft carrier "won back" funding
Шойгу счел необходимым построить в России еще несколько крупных городов
The State Duma appreciated the idea of banning the sale of grenades after the shooting at the MFC in Moscow
British military demanded $1.1 million for stuttering after Estonian frosts
Sasapost (Египет): американцы создают самый мощный лазер в истории. Что это значит?
Tank killer: the work of the PTKM-1R anti-roof mine was shown on video
Корпорация "Иркут" до конца 2018 года поставит ВКС РФ более 30 истребителей Су-30СМ
Как России зарабатывать больше на продаже вооружений
Putin signed the law on the powers of Roscosmos in the field of infrastructure construction
In the USA, they called the advantages of the Russian "Sun"
Американский эксперт назвал пять мощнейших российских танков
other topics discussed
2006-2021 © ВПК.name. All rights reserved.
When reprinting, link to ВПК.name required.
User agreement.
№ 21-PP in the register of information distributors.
18+
Website hosting: TimeWeb.