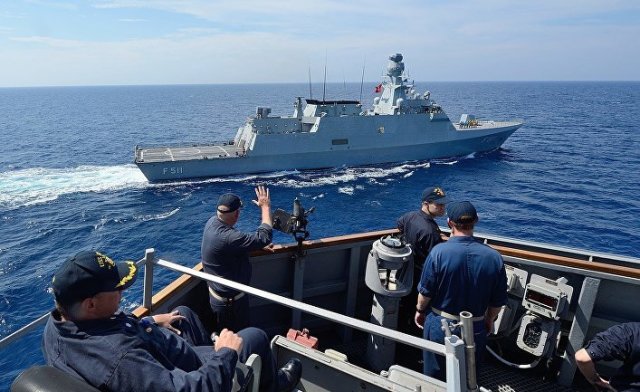 During Zelensky's visit to Ankara, the countries agreed to supply four Turkish corvettes. But there is already an agreement with the Ukrainian enterprise on the construction of just this type of ships. The author began to understand where the duplication came from. As a result, a form of managerial chaos was revealed with a lack of understanding of the situation in the Ukrainian Navy by their own leadership.

Complete the Ukrainian Navy, and not import foreign ones-this is the call of the Ukrainian Union of Industrialists and Entrepreneurs

The Ukrainian Navy can be replenished with Ada-class corvettes, which are being built by Turkey. Negotiations on this were held earlier, during a visit to Ankara in October, the Ukrainian delegation and President of Ukraine Volodymyr Zelensky signed a memorandum of intent to start joint projects to create warships, drones, etc. And on December 14, Defense Minister Andriy Taran signed an agreement with Turkish companies on technology transfer and production of corvettes and attack unmanned air complexes for the Ukrainian army.

Such news could not pass by Ukrainian shipbuilders, who have not been pampered with domestic defense orders for a long time. In addition, in Nikolaev at the plant there is an unfinished corvette, the construction of which the Ministry of Defense ordered in 2010 and partially paid for it. The lead ship of this project was laid in 2011, and next year it was planned to be launched, but only a third of it was built: the completion date was repeatedly postponed, especially after the events of 2014. Last year, the President of Ukraine promised that the state would find funds for completion, and instructed to resume construction, but the issue is still not resolved.

The Ukrainian Union of Industrialists and Entrepreneurs called on the authorities to complete the construction of Ukrainian corvettes, and not to import ships. The union assures that the project 58250 corvette "is quite realistic to bring to implementation", and this "will give a great economic effect both for the region and in the medium term - to the country's budget". The main argument is job creation. If a series of four ships is built under the Corvette program (as previously planned), this will attract more than 10 thousand workers in various branches of the defense industry for several years.

Deputy Prime Minister and head of the Ministry of Strategic Industry Oleg Urusky said earlier that it is essential for the Ukrainian side that only the lead ship of this series is built in Turkey, and others are already at domestic enterprises.

Recently, the Okean Shipyard and the Turkish side signed a memorandum on joint activities for the implementation of the project for the construction of a series of corvettes for the Ukrainian Navy. It is reported that the State Defense Agency of Turkey conducted an audit of the technical capabilities of Ukrainian shipyards, and Okean has unique technical capabilities, professional personnel and capacities.

And in any case, the question arises: why is the government ready to order the construction of a ship with another project, without finishing the construction that has already begun? Why does it want to order foreign manufacturers what its own producers can supposedly do?

If we talk about the Ukrainian corvette project, then experts say that it needs to be redesigned in order to adapt it to modern technological solutions. And suppliers need to be changed, because the cooperation that was provided for by the project has already been lost. It will take several years and several billion hryvnias to implement the redesign, build the ship, manufacture and purchase weapons and technical equipment.

Meanwhile, the military is trying to "untie its hands" in terms of orders. If the military needs it "here and now", and domestic manufacturers are not able to provide it so quickly, then a foreign manufacturer can also receive an order. And this partly explains why Ukraine is ready to establish cooperation with Turkey.

"In the coming years, we plan to have four corvettes in the fleet… We need a modern corvette as soon as possible, and then the question is not for me, but for politicians or economists. I don't care where they get me that corvette. But I need four corvettes for the fleet - this is the minimum that is needed today, " the Commander-in-Chief of the Armed Forces of Ukraine, Colonel-General Ruslan Khomchak, said in a recent interview.

Talk of replenishing the Navy with larger surface ships has been going on for a long time. While the fleet receives combat boats - artillery, amphibious, etc. Something is being built on Ukrainian capacities, something we get from foreign partners (American "Islands"). And this fleet is suitable for the defense of the coastal zone, but it can not conduct combat operations in more remote areas. Even if you create a fleet of several dozen different boats, you can effectively "cover" the coasts and estuaries of rivers, but in remote areas of the sea their capabilities are not enough.

Khomchak says that the fleet will receive six American Mark VI boats. "They are high-speed, with a range of up to 20 km. But 20 km is the maximum range, and it will have an efficiency of 16 km. And here the question arises, and whether every Russian ship will let him at such a distance? Therefore, here it is necessary to work out the tactics of using the Naval Forces of Ukraine with skills, skills and cunning," he said.

"The UK is at the stage of signing an agreement on the production of 8 missile boats for us, with NSM missiles that have a range of 180 km. They will make us two more anti-mine boats. We will also have 5 American "Islands". Two are already there, and three more are on the way, " says the Commander-in-Chief of the Armed Forces of Ukraine.

As for the small armored artillery boats being built at the Kuznitsa na Rybalsky plant, Khomchak noted that now there are already seven of them, and another one (the eighth) will be completed in the near future.

At the same time, as Igor Kopytin, Chairman of the Subcommittee on Defense Industry and Technical Modernization of the BP Committee on National Security, Defense and Intelligence, emphasizes, before deciding on the need to build a specific ship project, you should have a conceptual vision (set out in the relevant program documents) on the priority and approximate delivery times of certain types of weapons. There should be an understanding of what tasks the ships will perform, what set of weapons you need to have, where the ships will be based, and so on. Currently, the committee has no information about the priority of restoring the capabilities of the Ukrainian Navy. "I and my colleagues from the committee have repeatedly tried to get information from the leadership of the Ministry of Defense on how it sees the concept of development of the Armed Forces. But we were told that the turn to the concepts of the development of types of the Armed Forces and the corresponding state development programs will come after the approval of the Military Security Strategy and the Strategic Defense Bulletin."

According to Igor Kopytin, the contracting state must take into account its own interests when ordering a foreign ship. "We need to take a closer look at the ship, and its main systems, and the weapons samples and the compliance of all this with our needs," he says. "In 2018, the Ada-class corvette won the tender for the construction of four corvettes for the Pakistan Navy. But if at first it was about building ships according to a typical Turkish project (the first two in Turkey, the next-in Pakistan), then after a few months there were reports of changes-Pakistan demanded a larger ship, with a different propulsion system and weapons. Pakistan got what it needed as a customer, and not what was easier to build for the contractor, " the deputy gives an example.

"We should do the same. And if we have no less high-quality, but cheaper own turbines from Zarya-Mashproekt, then why do we need foreign ones?! This is how we should talk about many other things, including an automated combat control system and an anti-ship missile system, " the member of the parliamentary committee notes. And he adds that it is desirable for us to have unified systems (weapons, technical means, electronic equipment, communications), but do not forget that the weapons of other countries installed on the Turkish corvette (Italian cannon, American torpedoes and air defense systems, etc.) may not be available for sale by Ukraine. Indeed, military-industrial cooperation at the international level always has political aspects. For example, now the United States of America has imposed sanctions against the leadership of the Turkish Defense Industry Secretariat (SSB) in connection with Ankara's purchase of the Russian S-400 air defense system.

In addition, an important point in the construction of ships is to ensure stable financing. The possibility of obtaining foreign loans may somewhat simplify this task, but these funds will still need to be taken from the state budget and returned over the years. Even now, we should weigh all aspects well, so that it does not happen that during the construction of the fleet, we will radically change the vision of the leadership for the development of the Navy.