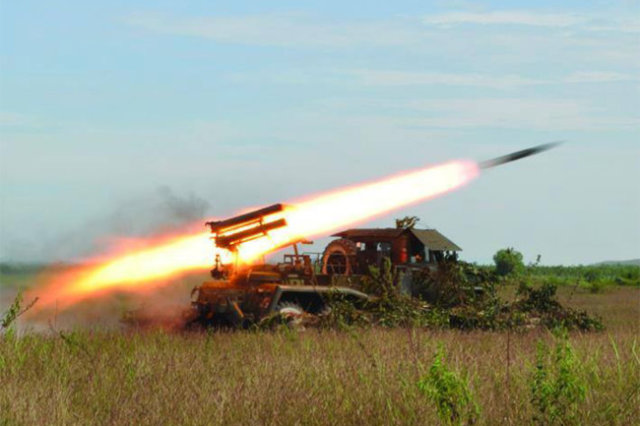 The Vietnamese army is practicing the use of old Soviet BM-14 multiple launch rocket systems for attacks on naval targets. In the text commenting on the video of live firing posted on the Network, it is noted that these installations do not have the necessary range and accuracy to hit enemy ships, but they can successfully cope with lightly armored amphibians approaching the shore.


A battery of BM-14 of Vietnam People Army opening up in an anti-invasion exercise. The Soviet MRLS lacks the range and the accuracy to strike ships but its 140mm rockets could do a number on lightly-armored amphibious vehicles. pic.twitter.com/QY6KvsXdbS

MLRS of this type have 16 guides for launching 140-mm turbojet high-explosive shells. The weight of each of them reaches 39 kg, the length is 1086 mm. Flight speed-more than 400 m / sec.

The weight of the warhead is 4.20 kg. It is believed that this is quite enough to disable a floating armored personnel carrier or some hovercraft.

To set up smoke screens that can hide the coast from the eyes of the enemy, smoke ammunition is used. Time of one salvo-up to 10 seconds.

The demonstrated installations are made on the chassis of three-axle all-terrain vehicles zil-131. Their cabins are covered by folding armor screens.

In addition to jet systems, T-34-85 tanks, Su-100 self-propelled artillery units, and various guns, including the zis-3, are used for the defense of the coast.

There are also a variety of anti-ship missile systems. It was reported about the creation of a launcher based on KAMAZ, designed to use the versions of Russian X-35 missiles produced in Vietnam.