Between Israel and Iran: why S-400s are silently watching the skies of Syria 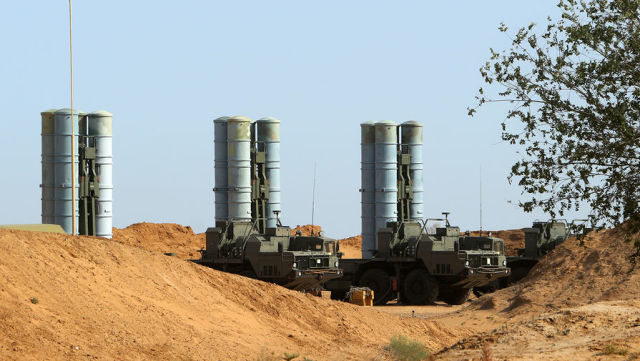 The Russian anti-aircraft missile system S-400 "Triumph" only "watches" as the Israeli Air Force invades Syrian airspace with impunity and attacks Iranian positions, writes the Greek agency Pentapostagma. However, in reality, Moscow should not interfere in the Iranian-Israeli confrontation, no matter where it takes place. The situation in the region was dealt with by the military observer of "Gazeta.En " Mikhail Khodarenok.

Despite the fact that Moscow positions its S-400 Triumph anti-aircraft missile systems as the best in the world, they only "watch" how the aircraft of the Israeli Air Force invade the airspace of Syria with impunity and launch missile and air strikes on the objects of Iranian armed groups and pro-Iranian groups, writes the Greek agency Pentapostagma. Panagiotis Nastos, an analyst at the publication, asked, " Why have the S-400s never responded to Israeli attacks?»

According to the author, thus the Russian Federation does not allow the emergence of a confrontation between the Israeli F-35 and Russian "Triumphs". At the same time, it allows the Russian and American defense industries to export their weapons to third countries on the world market.

Nastos pointed out that if the Russian military attacked the F-35, then either the combat vehicle or the S-400 itself would be destroyed as a result of retaliatory fire.

"No country would have acquired a weapon that was hit," the Greek author claims.

Pentapostagma believes that this is the reason why Russian anti-aircraft missile divisions do not open fire on Israeli Air Force aircraft.

In other words, the analyst of the publication Panagiotis Nastos focused exclusively on issues of military-technical cooperation in general and sales of weapons and military equipment in particular. However, the situation in Syria is much more complex and much more multifaceted than just arms sales. There are geopolitical, military, and military-technical components in this issue.

What Iran is doing in Syria

Iran's influence in Syria is constantly increasing. As previously noted in a conversation with " Gazeta.En " Vladimir Sazhin, Senior researcher at the Center for the Study of the Middle East Countries of the Institute of Oriental Studies of the Russian Academy of Sciences, said that Tehran's activity in Syria is increasing in several directions.

First, purely military. The Iranians are satisfied in certain favorable places military bases (without too much exaggeration, these objects can be called so) and stocks of weapons, ammunition, logistical means, and not so much for their units such as the Islamic revolutionary guard Corps (IRGC), and Shiite militias from Pakistan, Afghanistan, Iraq, the Iran and from Syria.

As a rule, such units and units are managed by officers of the Islamic Revolutionary Guard Corps. We can say that they are close to the Iranian armed groups, Vladimir Sazhin believes.

In addition, the Iranians are creating various transit points and warehouses for the militant Shiite organization Hezbollah, in which weapons and ammunition are accumulated. And they often do this "under the umbrella" of the Russian Armed Forces group in Syria, that is, in the immediate vicinity of various Russian military facilities.

At the heart of such actions, Iran hopes to protect itself from attacks by the Israel Defense Forces, which also operates in the region.

Since Israel will not subject Russian military personnel to missile and air strikes, Tehran believes, this will ensure the security of Iran's facilities.

Secondly, Iran is conducting a large-scale economic expansion in Syria. Representatives of Tehran are actively engaged in buying up real estate, acquiring various industrial enterprises (even those affected during the fighting, this does not matter much for Iranian buyers). Land plots are also being actively purchased.

Transactions are made either for Iranians or Syrians who represent Iran's interests in this country. First of all, we mean the Shiites and only then the Alawites. For example, in the Syrian capital of Damascus, there are already a lot of ads and signs of shops and various kinds of shops in Persian (Farsi). That is, Iran is actively strengthening in many sectors of the Syrian economy, Vladimir Sazhin emphasizes.

Third, it is certainly an ideological trend. Iran is conducting a huge work on "sheetali" of Syria's population, and as much as possible.

Directly converting Sunnis to Shiites is quite difficult, if possible in principle. But at the same time, the Iranians are using economic pressure on certain groups of unstable people in Syria.

If we recall the peculiarities of the situation in the country before the events of 2010-2011, then Syria was still not such a religious country, the expert says. Therefore, today the wavering and religiously unstable parts of the Syrian population are primarily the object of Shiite influence.

In addition, the Iranians are doing a great job of distributing various economic and financial privileges to many groups of the Syrian population, primarily Alawites and Shiites. They provide them with humanitarian assistance, conduct large-scale propaganda and PR work. And the results, in general, are there, says Vladimir Sazhin.

I must say that the Iranians have good positions at the grassroots and middle levels of the Syrian leadership. Moreover, they have strong connections in the special services and even at the highest level of the military and political elite of Syria.

However, the most important thing is that such actions by Tehran on the territory of the SAR represent an immediate threat to Israel's national security.

And to ensure it in Tel Aviv, there is no doubt that they will go to any measures and practically will not be limited to anything. It is solely for these reasons that Israeli Air Force aircraft invade Syrian airspace and launch missile and air strikes against Iranian targets.

The grouping of the Russian Armed Forces in Syria is in a rather delicate situation in this regard. On the one hand, it is necessary to support its ally in the region - official Damascus. On the other hand, the Kremlin's plans today absolutely do not include (and in any form) an armed confrontation with Israel. After all, it is necessary to clearly give an account of the fact that

The opening of fire by Russian anti-aircraft missile divisions on Israeli Air Force fighters inevitably translates the situation in the region into a large-scale war between Moscow and Tel Aviv.

And then in Moscow it will be necessary to answer fairly simple questions.

First, what would the political and military objectives of the conflict look like in this case? Moreover, it is completely unclear how even theoretically they can be formulated in principle.

Secondly, is it possible to achieve the set goals, if they can be identified, by military means?

Third, what would be the possible end results of the war? And, finally, the most important thing (now in fairly simple language) - why does Moscow need all this and what is the possible price of the issue?

By the way, it is still impossible to answer such questions unambiguously, analyzing the role of the USSR in the Arab-Israeli wars of the 1960s and 1970s.

However, there is reason to believe that the Kremlin has an understanding of all these military and political issues today.

Both Moscow and Tel Aviv are taking all possible measures to ensure that the actions of the Israeli Air Force do not lead to the defeat of Russian military facilities and casualties among the personnel of the Russian Armed Forces in Syria.

As for the combat tasks assigned to the S-400 anti-aircraft missile divisions in Syria (and this can be assumed with complete confidence), they consist exclusively in covering Russian military facilities (first of all, the Khmeimim air base and the Tartus naval Base) and only if their security is directly threatened.

In short, no one is going to fight with Israel in Moscow because of the strikes on the objects of Iranian formations in Syria. As for the analysis of the situation by the Pentapostagma agency, in this case, it is demonstrated, in the words of Nikolai Gogol, "an extraordinary lightness of thought".