The US has experienced the" karma " of double standards 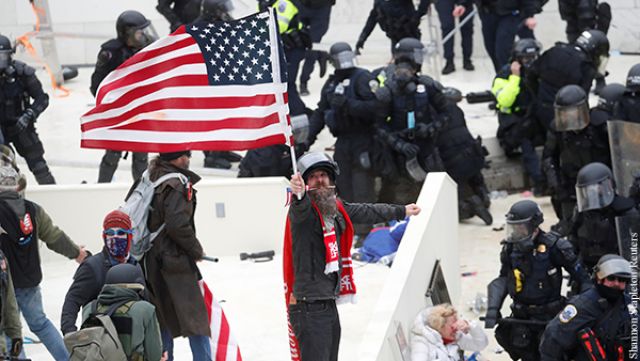 The world press is vigorously discussing the storming of the Capitol by supporters of Donald Trump and trying to understand the significance of what happened. If in China they talk about retribution for American double standards, then in Europe they dubbed the events the darkest day in the history of the United States. Observers agree that Trump has gone too far and will lose the support of even the most loyal supporters.

Mass riots in the United States and the storming of the Capitol by supporters of US President Donald Trump in the center of Washington have become the main topic of all world publications. Few people expected that the rally with the participation of like-minded people of the outgoing leader would turn into fierce bloody clashes with law enforcement officers and lead to several victims, as well as pogroms inside the parliament.

Against the background of the general wave of criticism of Trump, the Chinese newspaper Global Times stands out, which cited the opinions of ordinary Chinese about the latest events in Washington. Their comments often included words like" retribution "and" deserving, " especially regarding the storming of the Capitol and the mayhem in the office of Lower House Speaker Nancy Pelosi.

According to the author of the article, the images from the Capitol went viral not only in American, but also in international news agencies. "Pelosi can enjoy a beautiful sight – even at his office desk! For so long, American politicians have called the rioters "freedom fighters" in other countries. Now, at last, they had received retribution!" - the newspaper quotes the opinion of one of the users.

Many Chinese netizens admitted that they consider what they saw to be revenge. Having caused so much chaos around the world under the pretext of "freedom and democracy", the US has finally experienced the" karma " of its double standards. "For a long time, US politicians have criticized China for its efforts to eliminate Internet rumors and misinformation and slandered us for"infringing on freedom of speech." What are you doing now? President Trump is exercising his right to freedom!" - commented one of the Chinese bloggers.

One of the leading Israeli newspapers – the Jerusalem Post-quotes the statements of an orthodox Jew from Brooklyn, Heshi Tishler, an ardent supporter of Trump. He also participated in the controversial rally, but left the scene before the riots began. "We want to be there," Tishler told the Jewish Telegraph Agency.

Some of the Trump supporters who attended the rally – orthodox Jews-came to the rally on specially chartered buses from orthodox Jewish communities, some of which were organized into special WhatsApp groups. One of the participants said that Orthodox Jews organized at least eight buses to Washington. For some Orthodox Jews, it was a moment of reckoning. It was a shameful day, they said, but it didn't make them regret their support for Trump.

The German newspaper Der Spiegel called Wednesday's events an uprising, a coup d'etat and treason. "The United States struggled to maintain its composure after storming the Capitol. Trump struck a blow to the country in the last, darkest period of his presidency, " the publication believes.

The British newspaper The Times focuses readers 'attention on the fact that the US Congress" rejected an unprecedented attempt by President Trump to undermine the results of the 2020 election and this morning confirmed that Joe Biden has been elected president-elect." The article cites Senate Democratic leader Chuck Schumer's statement that Wednesday will join "that very short list of dates in American history that will live forever in disgrace."

One of the main Italian newspapers – Corriere della Sera-called the events "the darkest day". The author of the article emphasizes that as a result of clashes on Capitol Hill, four people were killed and 13 were injured. The newspaper calls the participants of the storming of the parliament building "militants". "Yesterday's images shocked even the closest employees (of the administration), who are beginning to wonder whether the conservative tabloid New York Post is right: Trump has become King Lear," the newspaper writes.

The American press issued an unequivocal condemnation of the incident. According to USA Today, " January 6, 2021 will be remembered as one of the darkest days in the history of the United States." As RIA Novosti notes, the Wall Street Journal newspaper is confident that what happened will manifest itself for many years, and support for Trump from the Republican Party will noticeably weaken. "As Trump himself tried to remind his supporters after the violence broke out, Republicans like to be seen as the party of law and order, and this is hardly the image he is now creating," the newspaper writes.

A columnist for The New York Times calls Trump "a wolf in sheep's clothing." "Trump's legions still exist, and now they are mourning the death and feeling even more deceived by many of their supposed allies in Washington, who rushed at them as soon as they did what they thought was asked of them. The problem is not those who took Trump at his word from the very beginning. Many, many elected Republicans took it neither seriously nor literally, but cynically. They brought this on themselves – and on us, " says the newspaper's columnist.