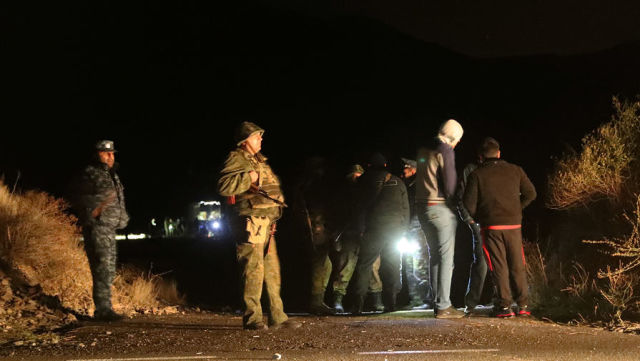 The Russian investigation has tightened the criminal article under which the case of the attack of the Azerbaijani military helicopter Mi-24 of the Russian Air Force is being conducted. The investigation is complicated by the fact that the suspects are on the territory of another State.

The investigation of the criminal case on the crash of the Mi-24 combat helicopter of the Russian Air Force on November 9 in Armenia near the village of Yeraskh in the Ararat region will be conducted under Part 2 of Article 105 "Premeditated murder of two or more persons", Interfax reports, citing an informed source.

Thus, the article became more severe-initially the case was initiated under Article 351 of the Criminal Code of the Russian Federation " Violation of flight rules or preparation for them, resulting in death by negligence." Now those responsible for this incident can face up to life imprisonment.

"The decision was made based on the results of investigative and operational actions taken within the framework of the case. With all the apparent evidence of the crime, the investigators had to first open a criminal case under the article under which such incidents are usually investigated. And then to collect materials for a more accurate qualification of the act, which was done, " the source said.

The case is complicated by the fact that the suspects are on the territory of another state. The investigation is being conducted by military investigators stationed at the 102nd Russian military base in Gyumri.

The Mi-24 was shot down by a portable anti-aircraft missile system at about 17:30 Moscow time while escorting a convoy of the 102nd base near the border of Armenia with the Nakhichevan Autonomous Republic. The convoy was sent to strengthen the posts of Russian border guards in Syunik.

All three were awarded Orders of Courage by Russian President Vladimir Putin for "courage, bravery and selflessness shown in the performance of military duty."

The incident occurred against the background of the escalation of hostilities in Nagorno-Karabakh. However, the Defense Ministry said that the helicopter was shot down outside the zone of military conflict. Azerbaijan admitted that it shot down a Russian helicopter by mistake and expressed its readiness to pay compensation to Moscow.

The mistake in Baku was explained by the fact that the helicopter flew in close proximity to the Armenian-Azerbaijani border.

Azerbaijani Defense Minister Zakir Hasanov said that the Russian helicopter flew in the dark, at low altitude and outside the radar detection zone of air defense.

"The Azerbaijani side apologizes to the Russian side in connection with this tragic incident, which is accidental and was not directed against the Russian side," the Foreign Ministry said in a statement.

"We assess the fact that Baku immediately admitted its guilt positively. We also note the assurances given to us by the Azerbaijani side that a prompt investigation of this incident will be conducted and the perpetrators will be punished," the Russian Foreign Ministry said.

Aliyev also asked to convey his condolences to the families and friends of the victims, and wished a speedy recovery to the injured pilot, Sputnik reports.Azerbaijan". Putin also declared the inadmissibility of such incidents.

Soon, the Nakhichevan Military Prosecutor's Office opened a criminal case under Article 342.2 (negligent attitude to service - the death of two or more people by negligence during the war, or fighting).

The Prosecutor General's Office of the Republic said that their employees, together with military experts, examined the missile launcher, including information systems, as part of the criminal case.

In addition, as stated in the department, they questioned the military personnel of the military unit, took the necessary documents, and also conducted other investigative measures.

Armenian President Armen Sarkissian also awarded all three Mi-24 crew members with medals "For Military Service". On December 12, a memorial stone was opened in the Yeraskh district and a prayer service was held.