Volkswagen showed a prototype of a robot tanker for electric vehicles 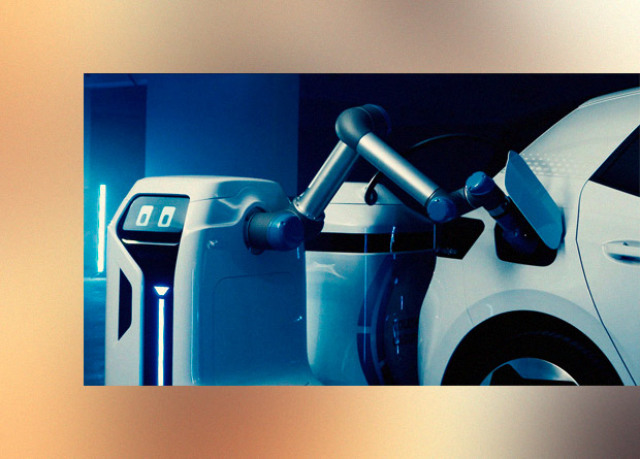 Volkswagen Group has presented a prototype of a robotic car charging system. It consists of battery packs on wheels and a robot with a manipulator that takes them around the parking lot and connects their charging cables to electric vehicles that need charging.

Charging is one of the main problems for owners of modern electric vehicles. In most cases, it takes several hours to fully charge an electric car. The latest models began to have the ability to quickly charge up to 80 percent, but even it takes about half an hour — incomparably more than refueling a conventional car. The problem is partly solved by city parking lots equipped with chargers, with which, for example, the driver can recharge the car while in the office or shop, but even in developed countries, stimulating the introduction of electric vehicles, public charging stations are still not enough.

Volkswagen last year presented a concept system to solve this problem, and now showed its working prototype. The company's engineers proposed to equip indoor or underground parking not with stationary chargers near each place or in a separate zone, but with mobile robots-tankers.


The system consists of two components. The first one is a mobile charging unit. It has a rechargeable battery and a charging cable. When announcing the prototype, the company did not disclose its characteristics, but in the initial description of the 2019 concept, the company stated that the battery capacity will be 25 kilowatt-hours. For comparison, the battery capacity in the base models of the Tesla Model 3 and Volkswagen ID.3 are 50 and 45 kilowatt-hours, respectively. The power supply, according to the same data, is designed for charging with a capacity of 50 kilowatts.

The charging unit itself cannot move, although it is equipped with wheels. A separate robot is responsible for transportation, which can serve several blocks, placing them at the machines in turn. After the owner has left the car in the parking lot, the robot receives a signal about the need to recharge directly through a V2X system or through a smartphone app. Then the robot drives up to the free charging unit, connects with it and brings it to the car. While at the car, he opens the cover of the charging connector with the help of a manipulator and inserts the charging unit cable into it. After that, the robot can leave to service another car, and the charging unit will remain in place, replenishing the car's battery.

There are also simpler mobile charges for electric vehicles, for example, the charging unit on wheels from FreeWire . There is also a completely different approach to replenishing the charge of an electric car — replacing the entire battery. Tesla was one of the first to introduce such a system, but it abandoned this idea in favor of developing a fast charging network. And the Chinese manufacturer of electric vehicles Nio has applied a similar system in their cars and, apparently, it works successfully: in mid-2020, the company said that its customers replaced the battery more than 500 thousand times, and the number of quick replacement stations exceeded 130 units.

The rights to this material belong to N+1
The material is placed by the copyright holder in the public domain
Страны
Китай
Компании
Tesla
Volkswagen
Проекты
2020-й год
Робот
Do you want to leave a comment? Register and/or Log in
Log in via Facebook
The Permanent Representative of the Russian Federation to international organizations in Vienna Ulyanov called the refusal of AUKUS to provide data on the union abnormal
The United States agrees with Stoltenberg on the inadmissibility of Russia's influence in the issue of NATO expansion
In the USA, it was proposed to ban "Solntsepeki" and "Pinocchio"
Putin signed the law on the powers of Roscosmos in the field of infrastructure construction
Korean aircraft carrier "won back" funding
Конфликты: Йемен - "забытая" война
The National Interest (США): российский танк Т-80 — это не шутка
In the USA, they were surprised by the size of the Su-75
Russia will offer India the technology of the Octopus tank
Шойгу счел необходимым построить в России еще несколько крупных городов
The State Duma appreciated the idea of banning the sale of grenades after the shooting at the MFC in Moscow
British military demanded $1.1 million for stuttering after Estonian frosts
Sasapost (Египет): американцы создают самый мощный лазер в истории. Что это значит?
Tank killer: the work of the PTKM-1R anti-roof mine was shown on video
Корпорация "Иркут" до конца 2018 года поставит ВКС РФ более 30 истребителей Су-30СМ
other topics discussed
2006-2021 © ВПК.name. All rights reserved.
When reprinting, link to ВПК.name required.
User agreement.
№ 21-PP in the register of information distributors.
18+
Website hosting: TimeWeb.