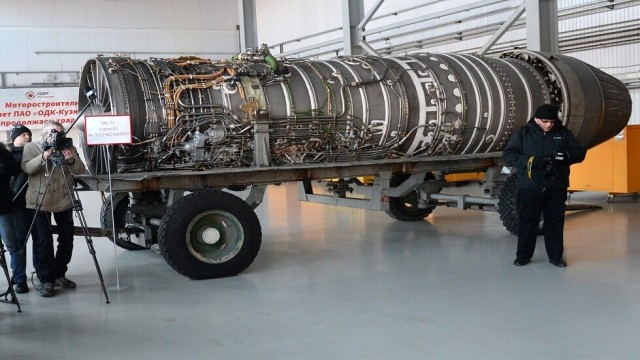 MOSCOW, December 9. /TASS/. The Russian Tu-160M strategic bomber with the latest NK-32-02 engines was included in the list of the most significant world achievements in the field of engine construction for 2020, compiled by the leading profile magazine Aviation Week & Space Technology and published in the latest issue of the publication.

"The Russian upgraded Tu-160M strategic bomber flew with upgraded NK engines-32-02 3 November. The newly developed compressor and turbine blades, as well as improved cooling, have increased the fuel efficiency of the turbojet dual-circuit engine, which can operate in afterburner mode, " the article says.

The Tu-160M with the NK-32-02 engine was the only example of Russian engine construction included in the publication's list.

On November 3, 2020, the deeply upgraded Tu-160M strategic missile carrier made its first flight with new NK-32-02 engines from the airfield of the S. p. Gorbunov Kazan aircraft factory. The flight took place at an altitude of 6 thousand meters. m and lasted 2 hours and 20 minutes. During the flight, the updated all-aircraft systems and avionics installed during the modernization of the aircraft were checked, as well as the performance of the new NK-32 02 series engine was evaluated. As noted at the time in the United aircraft Corporation, the flight took place in normal mode, the systems and equipment worked without comments.

The NK-32-02 engine was developed by the United engine Corporation (UEC, part of the rostec state Corporation).

The American magazine Aviation Week & Space Technology has been published since 2016 and is one of the world's most authoritative publications in the field of aviation and space.

The rights to this material belong to ТАСС
The material is placed by the copyright holder in the public domain
Страны
Россия
США
Продукция
НК-32
Ту-160
Компании
КАПО Горбунова
ОАК
ОДК УК
Ростех
Проекты
2020-й год
Do you want to leave a comment? Register and/or Log in
Log in via Facebook
The Permanent Representative of the Russian Federation to international organizations in Vienna Ulyanov called the refusal of AUKUS to provide data on the union abnormal
The United States agrees with Stoltenberg on the inadmissibility of Russia's influence in the issue of NATO expansion
In the USA, they were surprised by the size of the Su-75
The National Interest (США): российский танк Т-80 — это не шутка
Korean aircraft carrier "won back" funding
Шойгу счел необходимым построить в России еще несколько крупных городов
The State Duma appreciated the idea of banning the sale of grenades after the shooting at the MFC in Moscow
British military demanded $1.1 million for stuttering after Estonian frosts
Sasapost (Египет): американцы создают самый мощный лазер в истории. Что это значит?
Tank killer: the work of the PTKM-1R anti-roof mine was shown on video
Корпорация "Иркут" до конца 2018 года поставит ВКС РФ более 30 истребителей Су-30СМ
Как России зарабатывать больше на продаже вооружений
Putin signed the law on the powers of Roscosmos in the field of infrastructure construction
In the USA, they called the advantages of the Russian "Sun"
Американский эксперт назвал пять мощнейших российских танков
other topics discussed
2006-2021 © ВПК.name. All rights reserved.
When reprinting, link to ВПК.name required.
User agreement.
№ 21-PP in the register of information distributors.
18+
Website hosting: TimeWeb.