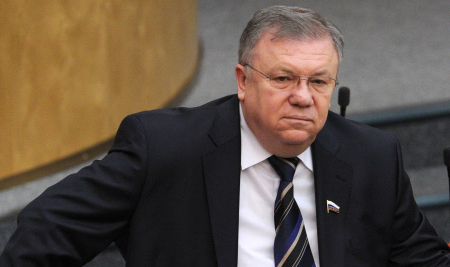 MOSCOW, Nov 24-RIA Novosti. Former commander of the black sea fleet Admiral Vladimir Komoyedov called the violation of Russian borders by the Navy destroyer "John McCain" rudeness and called on the Russian leadership to carefully consider the protection of the country's borders.

In an interview with the NSN radio station, the military noted that the boorish behavior of American sailors has become fashionable.

"You can't do that. We must respect the sovereignty again, the boundaries of the two territorial waters — three. Of course, no one will use weapons on them, but they tickle the nerves, " Komoyedov stressed.

He recalled that the FSB and marine units of the border guards are engaged in border protection. The Admiral wondered what measures they were taking to prevent violations.

"In the Soviet Union, everything was clear with the border," he said.

So, Komoyedov recalled how responsibility for border protection was distributed during the Soviet era.

"The General staff should think about how we protect the border and who is responsible for it," Komoyedov said.

The military added that if the decision was made to RAM an American ship, the responsibility for this would lie with the United States.

"Ramming is a forced measure against the violator. He is responsible, in this case — the United States of America, " the Admiral stated.

At the same time, the interlocutor is sure that the Russian ship would hardly have taken real actions against the violator.

"The sinking of the ship or the use of it is fraught with weapons, because every warship is immune. This is, in fact, a state territory, " Komoyedov concluded.

Earlier, the defense Ministry reported that the USS John McCain entered Russian territorial waters in Peter the Great Bay for two kilometers. A large anti-submarine ship of the Pacific fleet, Admiral Vinogradov, warned foreigners against such actions. After that, "John McCain" immediately went to neutral waters.

Later, the command of the US Seventh fleet explained the maneuver of the destroyer as an operation "to ensure freedom of navigation". The us military has said it does not consider these waters to be Russia's territorial sea.

The rights to this material belong to РИА Новости
The material is placed by the copyright holder in the public domain
Страны
Россия
США
Продукция
Arleigh Burke
Пётр Великий
Проекты
пр. 1155
ТОФ
ЧФ
Do you want to leave a comment? Register and/or Log in
Log in via Facebook
The United States agrees with Stoltenberg on the inadmissibility of Russia's influence in the issue of NATO expansion
In the USA, they were surprised by the size of the Su-75
The Permanent Representative of the Russian Federation to international organizations in Vienna Ulyanov called the refusal of AUKUS to provide data on the union abnormal
The National Interest (США): российский танк Т-80 — это не шутка
Korean aircraft carrier "won back" funding
Шойгу счел необходимым построить в России еще несколько крупных городов
The State Duma appreciated the idea of banning the sale of grenades after the shooting at the MFC in Moscow
British military demanded $1.1 million for stuttering after Estonian frosts
Sasapost (Египет): американцы создают самый мощный лазер в истории. Что это значит?
Tank killer: the work of the PTKM-1R anti-roof mine was shown on video
Корпорация "Иркут" до конца 2018 года поставит ВКС РФ более 30 истребителей Су-30СМ
Как России зарабатывать больше на продаже вооружений
Putin signed the law on the powers of Roscosmos in the field of infrastructure construction
In the USA, they called the advantages of the Russian "Sun"
Американский эксперт назвал пять мощнейших российских танков
other topics discussed
2006-2021 © ВПК.name. All rights reserved.
When reprinting, link to ВПК.name required.
User agreement.
№ 21-PP in the register of information distributors.
18+
Website hosting: TimeWeb.