A new blow to the MS-21 program

As reported by the Reuters news Agency on November 23, 2020, the US authorities have prepared a list of 89 Chinese and 28 Russian companies - "military end users" (Military End Users), which will limit their ability to purchase American technologies or products. The draft list includes the main Chinese aircraft manufacturing corporations Aviation Industry Corporation of China (AVIC) and Commercial Aircraft Corporation of China (SOMAS), and a number of other aircraft manufacturing and related companies, as well as companies from other industries. Of the Russian companies in the list , Reuters highlights PJSC Irkut Corporation, which produces new short-range passenger aircraft MS-21. 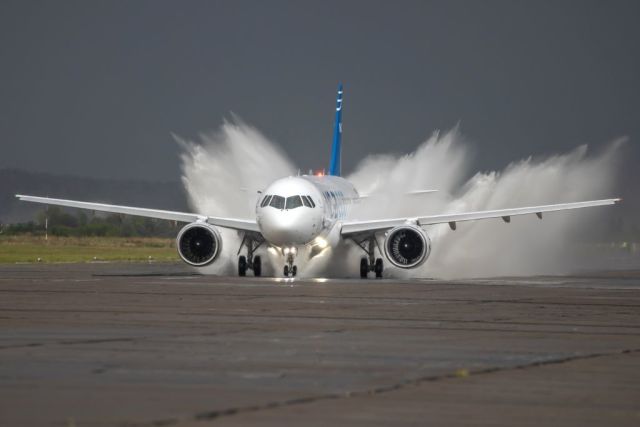 The second flight prototype of the MS-21-300 passenger aircraft (tail number "002", registration number 73053, serial number 21003) built by PJSC Irkut Corporation during tests for the possibility of operation in the presence of water on the runway. Ulyanovsk-Vostochny, July 2020 (C) PJSC Irkut Corporation"

Reuters-the trump Administration is close to announcing that 89 Chinese aerospace and other companies have military ties, which will limit their ability to purchase a number of U.S. goods and technologies, according to a draft list seen by Reuters.

The list, if published, could further escalate trade tensions with Beijing and hurt American companies that sell civil aviation parts and components to China, among other industries.

According to Zhao, Chinese companies have always acted in accordance with the law and strictly followed local laws and regulations when operating abroad, including in the United States.

Commercial Aircraft Corporation of China (COMAC), which is leading China's efforts to compete with Boeing and Airbus, is included in the list, as is the aviation Industry Corporation of China (AVIC) And ten related organizations. The list is included in a draft rule defining Chinese and Russian companies that the United States considers "military end users" - a term that means that American suppliers must obtain licenses to sell them a wide range of commercially available products.

According to current practice, applications for such licenses are more likely to be rejected than granted.

Us President Donald trump has stepped up his actions against China in recent months. Ten days ago, he issued an Executive order banning American investment in Chinese companies that Washington claims are owned or controlled by the Chinese military.

The now-discussed list awaiting approval comes after the U.S. Commerce Department expanded the definition of "military end-user"in April. The April rule applies not only to the armed forces and national police, but also to any individual or legal entity that supports or contributes to the maintenance or production of military equipment, even if their business is mostly non-military.

Export restrictions apply to items as diverse as computer software such as word processing, scientific equipment such as digital oscilloscopes, and aircraft parts and components.

As for aviation equipment, it has everything from brackets for flight control units to the engines themselves.

News of the list comes at a difficult time for the US aerospace industry, as Boeing is seeking airworthiness approval in China for its Boeing 737 MAX plane after it was approved by US regulators last week. In March 2019, China was the first country to impose a ban on the operation of this aircraft after two fatal crashes, and it is expected that it will take another months for this ban to be lifted. A Boeing spokesman declined to comment.

Washington-based trade lawyer Kevin wolf, a former U.S. Department of Commerce official, said the Commerce Department had referred the draft of the new rules to a technical Advisory Committee made up of industry representatives and it should have been kept secret.

Wolf said the rules and list could still be changed, and that time is running out for them to take effect under the trump administration, as they will need to be approved and sent to the Federal register, the official publication of U.S. law, by mid-December.

In a draft of the rules reviewed by Reuters, the U.S. Commerce Department says that being able to control the flow of American technology to joint-stock companies is "vital to protecting U.S. national security interests."

But a former US government official, who did not want to be named, said that "just making a list and making it public is a provocative act." An aerospace industry source said this could prompt China to respond.

According to an industry source, the inclusion of COMAC would come as a surprise to at least one major us supplier, who believed that this Chinese company was not the ultimate military user.

The list will also give European competitors the opportunity to promote their manufacturers, who will be able to indicate that they do not need to overcome such obstacles, even if the US grants licenses, an industry source said.

A GE spokesperson said that its global joint ventures operate in accordance with all laws and that the company is working to obtain licenses related to end-users in the military.

In addition to the 89 Chinese lists, the draft rule also identifies 28 Russian companies, including Irkut, which is also seeking to break into the dominant Boeing market with the development of the MS-21 airliner.

The list of 117 companies is "not exhaustive," the draft rules say, and is considered only an "initial series."