OneWeb sent 36 satellites to launch at the Vostochny cosmodrome 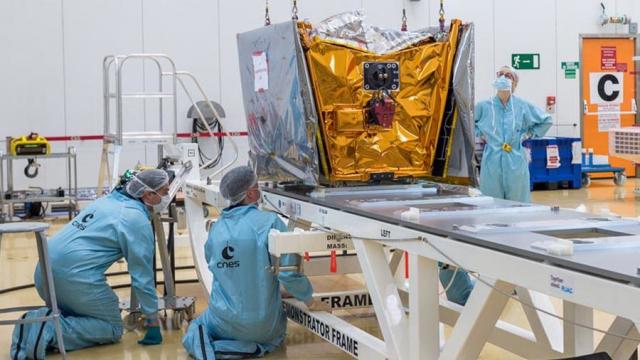 TASS, November 18. Communications satellites of the British company OneWeb were sent from Florida to the Vostochny cosmodrome in preparation for their launch into orbit. This was reported on the company's Twitter.

"36 OneWeb satellites flew on Board a plane from Florida to the Vostochny cosmodrome for launch into space in December. Congratulations to the entire team, " the message reads.

The message also includes a video showing an An-124-100 Ruslan aircraft with vehicles on Board, taking off from the runway.

The first launch of oneweb communications satellites from the Vostochny cosmodrome is scheduled for December 2020. OneWeb now has 74 satellites in low stationary orbit and plans to launch hundreds more. In March, the British company was forced to file for bankruptcy and reorganization after it failed to receive about $2 billion from a group of investors, including Japan's SoftBank.

In April, OneWeb asked the UK government to provide a loan of £500m (about $645m) as part of a broader $2.2 bn funding package from private investors. Then London refused the company, but in July decided to invest in its share capital to establish control over OneWeb. It is planned that the British government and the Indian company Bharti Global will spend $500 million each to acquire shares in the company.

The rights to this material belong to ТАСС
The material is placed by the copyright holder in the public domain
Кредитование
Страны
Великобритания
Индия
Япония
Продукция
Ан-124
Ан-124-100
Проекты
2020-й год
Восточный Космодром
Do you want to leave a comment? Register and/or Log in
Log in via Facebook
The Permanent Representative of the Russian Federation to international organizations in Vienna Ulyanov called the refusal of AUKUS to provide data on the union abnormal
In the USA, they were surprised by the size of the Su-75
The United States agrees with Stoltenberg on the inadmissibility of Russia's influence in the issue of NATO expansion
In the USA, it was proposed to ban "Solntsepeki" and "Pinocchio"
Putin signed the law on the powers of Roscosmos in the field of infrastructure construction
Korean aircraft carrier "won back" funding
Конфликты: Йемен - "забытая" война
The National Interest (США): российский танк Т-80 — это не шутка
Russia will offer India the technology of the Octopus tank
Шойгу счел необходимым построить в России еще несколько крупных городов
The State Duma appreciated the idea of banning the sale of grenades after the shooting at the MFC in Moscow
British military demanded $1.1 million for stuttering after Estonian frosts
Sasapost (Египет): американцы создают самый мощный лазер в истории. Что это значит?
Tank killer: the work of the PTKM-1R anti-roof mine was shown on video
Корпорация "Иркут" до конца 2018 года поставит ВКС РФ более 30 истребителей Су-30СМ
other topics discussed
2006-2021 © ВПК.name. All rights reserved.
When reprinting, link to ВПК.name required.
User agreement.
№ 21-PP in the register of information distributors.
18+
Website hosting: TimeWeb.