On November 17, 2020, the Hungarian government signed a contract with the Brazilian aircraft manufacturer Embraer [...] to supply the Hungarian air force with two new Embraer C-390 Millenium medium military transport aircraft in the KS-390 transport and refueling configuration. The aircraft should be delivered in 2023 and 2024. 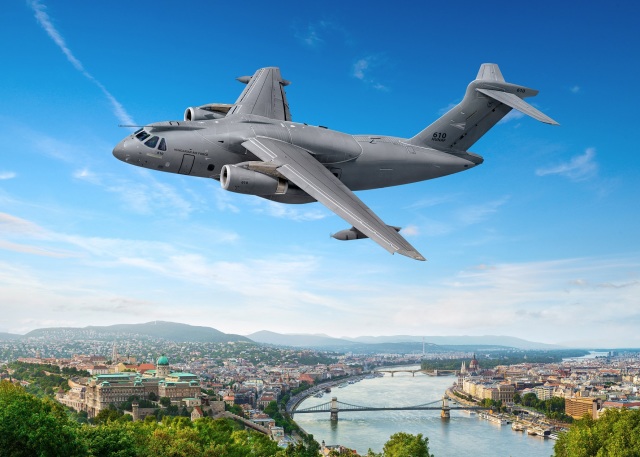 Hungary thus became the second actual foreign customer of the Embraer C-390 aircraft, after Portugal, which in July 2019 signed a contract for the purchase of five aircraft in the amount of 837 million euros, with delivery in 2023-2027.

The C-390 transport and refueling aircraft (KC-390) has been developed by Embraer since 2006 and is a ramp vehicle made in the C-130 Hercules class and claims to replace the latter. Equipped with two international Aero Engines V2500-E5 turbofan engines, the C-390 aircraft with a maximum take-off weight of 81 tons must carry up to 23 tons of cargo in a cargo cabin 17.75 m long, as well as perform the tasks of a tanker aircraft (maximum fuel weight up to 37.4 tons). Assistance in the C-390 project was previously provided by Voeipd Corporation.

To date, two C-390 prototypes have been built (which made their first flights in 2015 and 2016) and three [...] first production C-390 aircraft transferred to the Brazilian air force (the lead of which made its first flight on October 9, 2018). The Brazilian air force under the agreements of 2010 and 2014 ordered a total of 28 serial C-390 aircraft. In October 2018, the C-390 received a type certificate from the national civil aviation Agency of Brazil (Agência Nacional de Aviação Civil, ANAC).

Foreign companies-ENAER of Chile, Fabrica Argentina de Aviones of Argentina (FAdeA), OGMA of Portugal, and Aero Vodochody of the Czech Republic - are also participating in the development and production program for the C-390 aircraft, as well as an agreement on participation with the government of Colombia. It was assumed that the air forces of the listed countries would also order 32 C-390 aircraft (Colombia-12, Argentina, Portugal and Chile - six each, the Czech Republic-two), but so far only the Portuguese government has issued a firm contract for five aircraft from the listed countries.

It is also planned to create a commercial version of the aircraft, a preliminary agreement on the purchase of six such machines was signed in 2018 by SkyTech.

The rights to this material belong to bmpd.livejournal.com
The material is placed by the copyright holder in the public domain
Страны
Аргентина
Бразилия
Венгрия
Колумбия
Португалия
Чехия
Чили
Продукция
C-130
KC-390
Компании
Aero Vodochody
Embraer
Проекты
2020-й год
Do you want to leave a comment? Register and/or Log in
Log in via Facebook
In the USA, they were surprised by the size of the Su-75
Шойгу счел необходимым построить в России еще несколько крупных городов
Россия получит авиационное преимущество над ЕС и США
Ukraine has upgraded the commander's tank
The Ministry of Defense of the Russian Federation is preparing to adopt a new "Shell" and a fighter drone "Derivation"
Russia has collected archival information about the service and life of all generals from 1917 to 2020
Так ли все плохо с Тихоокеанским флотом
How to return the US fear of Russian Naval aviation
«Концепция сетецентрической войны родилась в СССР, а развитие получила в США"
French special forces are preparing to fly on "jet skates"
США оставили биологическое оружие Талибану
The Permanent Representative of the Russian Federation to international organizations in Vienna Ulyanov called the refusal of AUKUS to provide data on the union abnormal
The United States admitted that they dropped the fuel tank from the F-16 aircraft on a Japanese village due to an emergency situation
«Бастион» для «Циркона». Куда приземлят гиперзвуковую ракету
Доездился: Илону Маску грозит финансовый крах
other topics discussed
2006-2021 © ВПК.name. All rights reserved.
When reprinting, link to ВПК.name required.
User agreement.
№ 21-PP in the register of information distributors.
18+
Website hosting: TimeWeb.