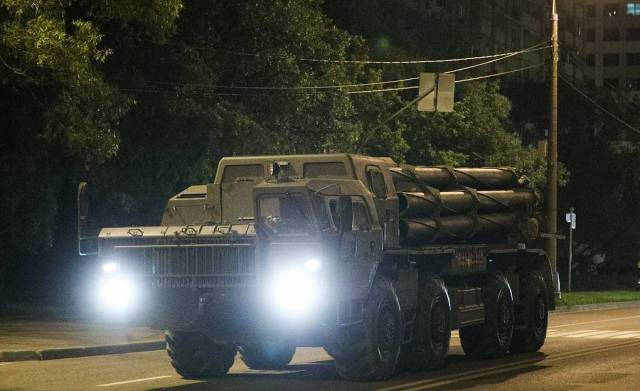 MOSCOW, November 18. /TASS/. Tornado-S large-caliber multiple launch rocket systems (MLRS) will completely replace the existing Smerch MLRS and outdated Uragan systems by the end of 2027. This was announced in an interview with the newspaper "Red Star" chief of the missile forces and artillery of the Armed Forces of the Russian Federation, Lieutenant General Mikhail Matveevsky.

On November 19, Russia celebrates the day of rocket troops and artillery.

"The planned re-equipment of rocket artillery units with modern multiple launch rocket systems of the Tornado family continues. By the end of 2027, the large-caliber Tornado-S MLRS, which has improved characteristics and an expanded range of missiles, will almost completely replace the existing Smerch MLRS and the outdated Uragan [systems], and the medium-caliber Tornado - G MLRS, which has an automated target guidance system, will [replace] the outdated Grad MLRS, "Matveevsky said.

"For military operation in the connection of the Western military district received interspecific artillery systems "Coalition-SV". This complex is unique. It has a deserted combat compartment, and the processes of pointing and loading the gun are carried out automatically without human intervention, " Matveevsky said.

He added that since 2012, the share of modern samples in the missile forces and artillery has increased from 25% to 60%.

The Tornado-S MLRS was created as a result of a deep modernization of the Smerch MLRS. The new system has an increased range and accuracy of shooting. In addition, "Tornado-C" has the ability to introduce an individual flight task for each projectile. The system is designed to destroy manpower, equipment, stationary and moving single and group objects.

At the Army-2020 forum, the Russian defense Ministry signed contracts for the supply of combat and transport-loading vehicles of the Tornado-S MLRS and 122-millimeter rockets.

"Tornado-G" was the first of the MLRS to receive an automatic guidance and fire control system that allows you to continuously determine the location of the combat vehicle during the March and after arriving at the position in the shortest possible time to open fire. Also, a monoblock high-explosive fragmentation projectile was created for it, which uses a fuse with an altimeter, which allows you to adjust the height and detonate the ammunition either at a height of several meters, or when it collides with the ground.

The rights to this material belong to ТАСС
The material is placed by the copyright holder in the public domain
Страны
Россия
Продукция
2С36 Коалиция-СВ
9А52-2 Смерч
Град РСЗО
Мста-С
Торнадо
Торнадо-Г
Торнадо-С
Ураган РСЗО
Компании
Высокоточные комплексы
Минoбороны РФ
Проекты
АРМИ-20XX
Do you want to leave a comment? Register and/or Log in
Log in via Facebook
In the USA, they were surprised by the size of the Su-75
Шойгу счел необходимым построить в России еще несколько крупных городов
Россия получит авиационное преимущество над ЕС и США
Ukraine has upgraded the commander's tank
The Ministry of Defense of the Russian Federation is preparing to adopt a new "Shell" and a fighter drone "Derivation"
Russia has collected archival information about the service and life of all generals from 1917 to 2020
Так ли все плохо с Тихоокеанским флотом
How to return the US fear of Russian Naval aviation
«Концепция сетецентрической войны родилась в СССР, а развитие получила в США"
French special forces are preparing to fly on "jet skates"
США оставили биологическое оружие Талибану
The Permanent Representative of the Russian Federation to international organizations in Vienna Ulyanov called the refusal of AUKUS to provide data on the union abnormal
The United States admitted that they dropped the fuel tank from the F-16 aircraft on a Japanese village due to an emergency situation
«Бастион» для «Циркона». Куда приземлят гиперзвуковую ракету
Доездился: Илону Маску грозит финансовый крах
other topics discussed
2006-2021 © ВПК.name. All rights reserved.
When reprinting, link to ВПК.name required.
User agreement.
№ 21-PP in the register of information distributors.
18+
Website hosting: TimeWeb.