The Australians have created a hydraulic robot tentacle

Engineers from Australia have developed a biomimetic soft manipulator for robots that can grab objects by wrapping around them like the tentacles of an octopus or the trunk of an elephant. The manipulator is made of fabric and is driven by a hydraulic actuator . It can capture objects of various shapes, work with them in a limited space, and also manipulate fragile objects, thanks to the built-in pressure sensors. An element with variable stiffness in the design of the manipulator allows it to hold loads weighing 220 times more than its own, according to an article published in the journal Advanced Materials Technologies.

Soft robot development is a popular and actively developing area in robotics. Thanks to soft materials, such robots can be used where careful interaction with the environment is required, such as in medicine, when working with fragile objects, or, for example, for conducting underwater research.

Manipulators that are used in soft robot designs usually look like pincers or consist of several elastic fingers that are driven by hydraulics or Pneumatics. However, grippers with this design do not cope well with heavy objects of complex shape.

Engineers from the University of New South Wales, led by Thanh NHO Do, developed a soft manipulator that does not have such disadvantages. It looks and works like a tentacle and is able to wrap around objects, snugly fitting to their surface. The manipulator consists of four main components: a hydraulic actuator, a fabric shell, pressure sensors, and a variable stiffness element. 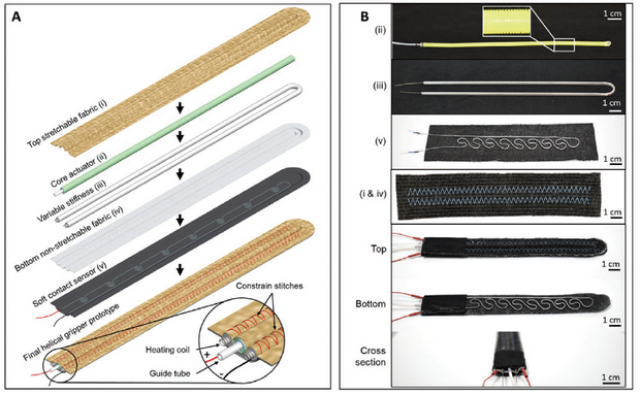 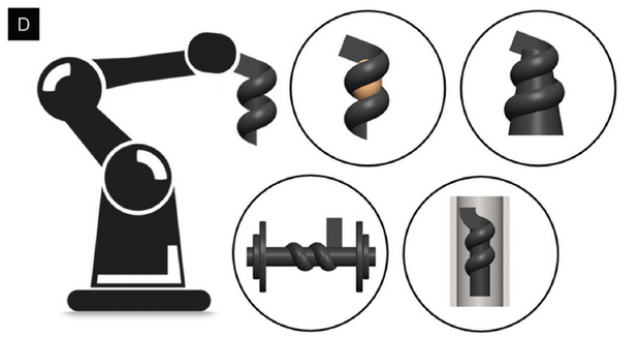 
The hydraulic actuator, which plays the main role in the operation of the device, is a soft stretchable silicone tube inserted into a spiral of fishing line (polyvinylidene fluoride). At the same time, the outer diameter of the silicone tube is slightly larger than the inner diameter of the spiral for greater efficiency of the actuator. Water is used as the working fluid. As the liquid pressure increases, the inner silicone tube tends to expand in all directions, but the fishing line reel limits the radial extension, while leaving the possibility of elongation in the direction of the longitudinal axis of the tube. At the same time, there is a rotational movement opposite to the direction of winding the fishing line. 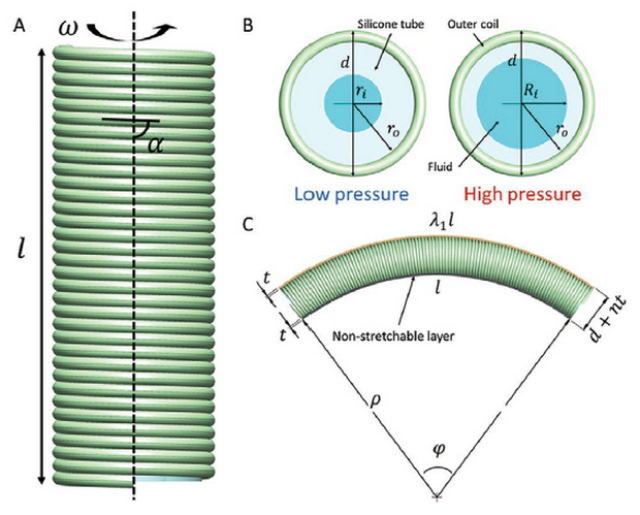 The scheme of the actuator


The outer shell of the tentacle is made of several layers of fabric that are sewn together to form channels for the placement of the hydraulic actuator and the device for changing the stiffness. The shell material on one side can stretch (for example, " spandex» ), and on the opposite side, a cotton fabric with a limited ability to stretch is used. Due to this, when the hydraulic actuator located inside is deformed, the entire manipulator-tentacle is bent and twisted into a spiral, and the higher the pressure applied to the actuator, the stronger the manipulator is twisted into a spiral (with a large number of turns).

To get real-time information about the pressure that the manipulator exerts on the surface of the object, the developers have built in soft pressure sensors. They are made in the form of silicone channels twisted in a spiral, which are filled with a liquid eutectic alloy of gallium and indium. Deformation of the channels under external pressure leads to a change in the electrical resistance. The sensors are positioned sequentially on one side at several points along the tentacle. Thanks to this, the tentacle can be used to manipulate fragile objects without the risk of damaging them.

In order for the manipulator to lift and hold the captured load on the weight, the engineers equipped it with an element with a temperature-variable stiffness. It is a tube made of polyethylene terephthalate, inside which there is a heating element-a stainless steel spiral, which is heated by an electric current. When heated above a threshold temperature of approximately 67 degrees Celsius, the tube material undergoes a phase transition and becomes pliable, allowing the tentacle to be shaped as desired. After switching off the heater and cooling, the tube material becomes rigid, fixing the shape of the manipulator. With a current of 0.5 amps, it takes less than ten seconds to heat the device to 80 degrees Celsius.

Due to the small size and location of the heating element inside the tube, it is possible to avoid significant heating of the external surface of the manipulator. And to speed up cooling after the heater is turned off, a 13-degree Celsius stream of cold air is fed into the PET tube from a device that operates on the basis [...] of the Rank-Hilsch vortex effect. This makes it possible to cool the entire length of the tube from 80 to 50 degrees Celsius in 11 seconds. The full heating and cooling cycle, according to the developers, takes about 24 seconds.


To evaluate the capabilities of the new manipulator, the engineers conducted a series of experiments with loads of different weights and shapes, which showed that the manipulator is more effective when working in a configuration where the applied force is directed perpendicular to the axis passing along the spiral of the twisted tentacle. In this position, the manipulator was able to grab and hold a box of tools weighing 1.8 kilograms, which is 220 times more than the device's own weight (8.2 grams). In addition, due to the ability to twist into a spiral and wrap around objects, the manipulator can get objects from narrow spaces and holes, for example, from high cylindrical cavities, as well as manipulate thin oblong objects such as rods, pencils, wrenches and screwdrivers. 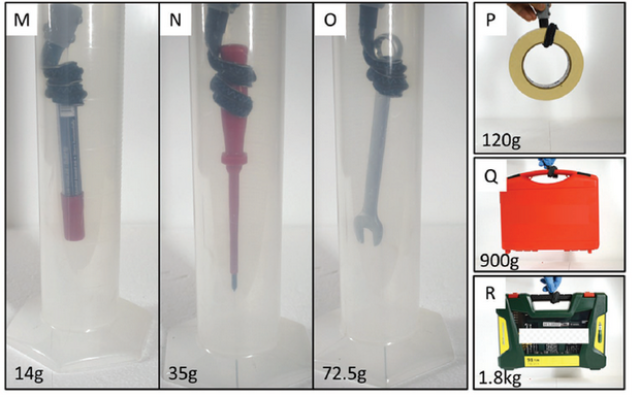 The grip holds objects of various shapes and weights 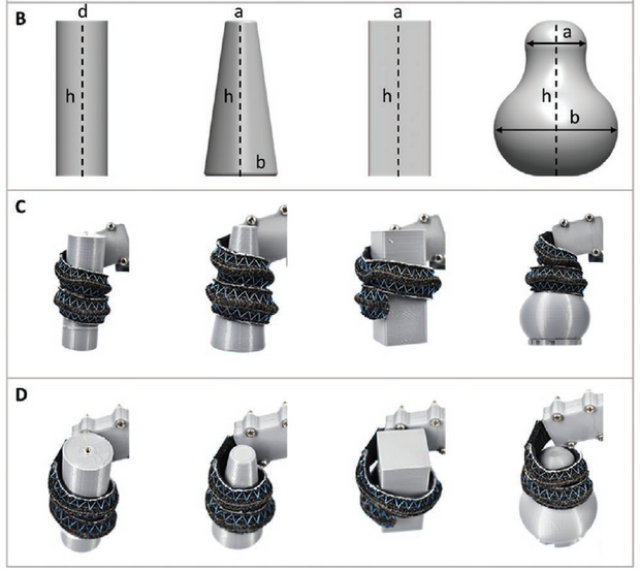 
For a reliable capture, as the developers note, it is necessary that the tentacle is wrapped around the captured object at least once, so there is a limit on the size of the object. The larger the item, the longer the manipulator should be.

In the future, the developers plan to experiment with the material for the stiffness modification module to reduce power consumption and heating temperature, as well as integrate the manipulator with a robotic arm with the possibility of tactile feedback based on their previous developments. According to their estimates, commercially available technology based on the new manipulator may appear in about 12-16 months.

Earlier, we talked about Korean engineers from Koryo University who used a different principle to activate a soft robot tentacle. The actuator they developed is based on the phenomenon of electroosmosis.