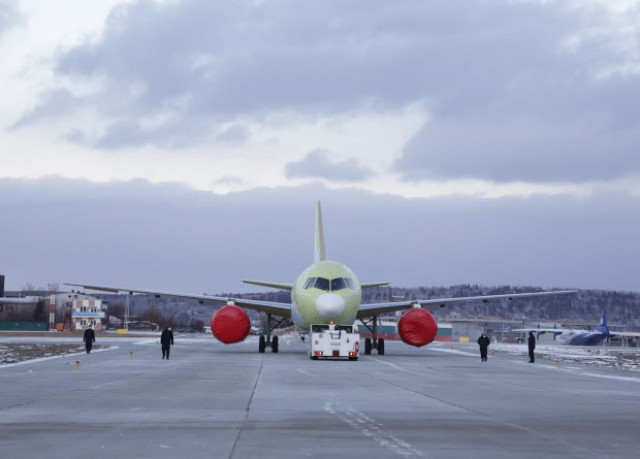 Irkut Corporation rolled out the first prototype MS-21-310 passenger aircraft with Russian-designed PD-14 engines. According to the rostec state Corporation, on November 6, 2020, the aircraft was transferred from the final Assembly shop to the flight test division of the Irkutsk aviation plant.

MS-21 has been created since the first half of the 2000s. Depending on the configuration, the airliner can carry from 150 to 210 passengers. Its flight range will be six thousand kilometers, and its flight speed will be about 870 kilometers per hour. In its class, the liner received the widest fuselage. Its width is 4.06 meters. The length of the MS-21 is 42.2 meters, the wingspan is 35.9 meters, and the height is 11.5 meters.

The maximum take-off weight of the airliner is 79.3 tons with a maximum commercial load of 22.6 tons. The MS-21 is the world's first narrow-body passenger aircraft with a wing made of composite materials. The first flight of the new Russian aircraft took place in may 2017.

The PD-14 turbofan engine has been under development since 2008. This is the first new Russian-designed aircraft engine in the last 30 years. The power plant is designed specifically for the MS-21. the PD-14 Dual-circuit two-shaft engine is capable of developing up to 14 tons of thrust during take-off. The MS-21 will be delivered to Russian customers with PD-14 engines in the MS-21-310 modification, and for export-with American PW1400G powerplants.

Serial production of the PD-14 has been underway since January 2020. Earlier it was reported that the first flight of the MS-21-310 with PD-14 engines will take place before the end of 2020.