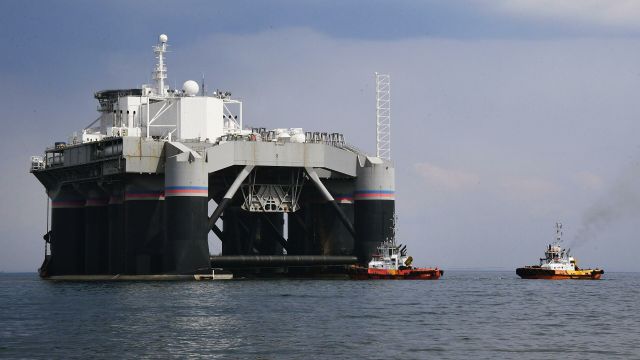 MOSCOW, Nov 6-RIA Novosti. The floating spaceport "Sea launch", owned by the S7 group, may in the future be of interest to the Ministry of defense for launching military satellites, believes Alexander Ivanov, a member of the Board of the Military-industrial Commission of Russia, who oversees the rocket and space industry.

"The question is complicated. The Rokot project also started as a commercial project and ended with military launches. Now "Sea launch" is a completely commercial project, where state assistance is needed, but in a limited amount, " he said in an interview with RIA Novosti.

At the same time, Ivanov added, the ability to conduct launches from the Sea launch platform to sun-synchronous or polar orbits from the Kuril region may arouse interest in the military. "For the defense Ministry, this orbit is quite interesting," the source said.

The Sea launch project was created in 1995. It provided for the launch of Zenit missiles from the Equatorial Pacific ocean. In 2014, the operation of the complex was suspended due to the refusal of Ukraine, where these missiles were manufactured, to supply carriers. At that time, 36 launches were conducted from the complex. In 2016, Sea launch was purchased by the S7 group for $ 150 million, hoping to resume launches. But, having not received permission to purchase Zenit missiles, in 2020 it moved the complex from the United States to Russia. Now the command ship and the launch platform are located at the Slavyansk ship repair plant. Roscosmos offers a new Soyuz-5 rocket for use from Sea launch, and S7 has started developing its own light rocket.

The rights to this material belong to РИА Новости
The material is placed by the copyright holder in the public domain
Страны
Россия
США
Украина
Продукция
Рокот
Компании
ВПК РФ
Роскосмос
Персоны
Борисов Юрий
Проекты
2020-й год
Морской старт
Союз-5 РН
Do you want to leave a comment? Register and/or Log in
Log in via Facebook
Шойгу счел необходимым построить в России еще несколько крупных городов
Россия получит авиационное преимущество над ЕС и США
In the USA, they were surprised by the size of the Su-75
Ukraine has upgraded the commander's tank
The Ministry of Defense of the Russian Federation is preparing to adopt a new "Shell" and a fighter drone "Derivation"
Russia has collected archival information about the service and life of all generals from 1917 to 2020
Так ли все плохо с Тихоокеанским флотом
How to return the US fear of Russian Naval aviation
«Концепция сетецентрической войны родилась в СССР, а развитие получила в США"
French special forces are preparing to fly on "jet skates"
США оставили биологическое оружие Талибану
The Permanent Representative of the Russian Federation to international organizations in Vienna Ulyanov called the refusal of AUKUS to provide data on the union abnormal
The United States admitted that they dropped the fuel tank from the F-16 aircraft on a Japanese village due to an emergency situation
«Бастион» для «Циркона». Куда приземлят гиперзвуковую ракету
Доездился: Илону Маску грозит финансовый крах
other topics discussed
2006-2021 © ВПК.name. All rights reserved.
When reprinting, link to ВПК.name required.
User agreement.
№ 21-PP in the register of information distributors.
18+
Website hosting: TimeWeb.