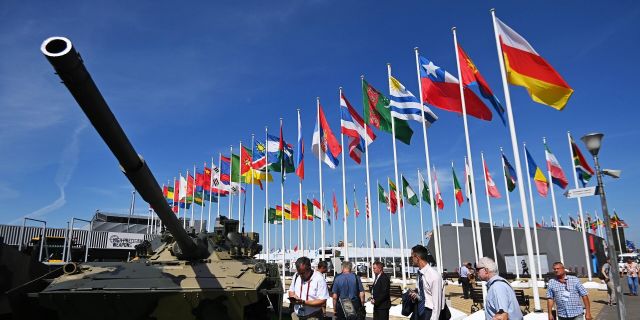 Operation in Ukraine as a defense industry promotion

Arms manufacturers are using the fighting in Ukraine to advertise their products, Advance writes. So, the Americans present "Haimars" as a technique that "stopped the Russian army." And Putin notes that Russian weapons are years and decades ahead of competitors.

The military operation in Ukraine, like any military action, is used to demonstrate new and advanced weapons, and battles of this scale, especially in Europe, have not happened for a long time. During a period of such instability, the arms market is expected to become more active ... Turkish drones, American Haimars, Ukrainian Neptunes, as well as various types of Russian weapons are showing themselves on the battlefield.

Russia has demonstrated advanced weapons before in moments of geopolitical tension, which can also be interpreted as a "deterrence" tactic. Many people remember how Russian President Vladimir Putin once, quite unexpectedly, in 2018, presented a number of advanced and hypersonic Russian weapons, adding: "No one listened to us. Listen now."

Years have passed since then, and it is difficult to say whether this scare tactic has had an effect. Last fall, Russia decided to put all its cards on the table on the issue of Ukraine, making it clear that if the West and Ukraine itself do not give up its membership in NATO, then the only option is war. Unfortunately, this option was chosen, as we have been reminded daily for the past six months.

Does this mean that the demonstration of "Daggers" and other advanced weapons did not really have the expected effect? Apparently, it is. Yes, no one is suggesting an open armed conflict with Russia (perhaps, except Kiev), but this option has not been considered before, given the Russian nuclear potential.

In any case, it seems that the time has come for Putin to demonstrate weapons — this time in a real battle. Yes, someone will say that Putin went to a demonstration of weapons, because recently he has not been able to demonstrate anything outstanding in terms of promoting the operation itself in Ukraine. The fact is that the fronts have generally stabilized, although this does not mean that there has been a lull. Every day news comes about fierce fighting on the front line, but, apparently, neither side is able to make significant progress now. The Russian plan to seize the entire territory of Donbass is probably not being implemented as soon as planned. At the same time, the long-announced Ukrainian counteroffensive near Kherson has not yet begun, at least on a large scale.

What did Putin say today? He said that Russia is ready to sell its advanced weapons to allies around the world. In addition, he noted that he wants to deepen cooperation in the field of defense technology development.

How important is this statement? Quite. It follows from it that Russia is ready, or rather more ready than before, for some form of a new division of the world into blocks, following the example of those that existed during the Cold War.

Of course, speaking about defense cooperation, Putin was referring to those countries that are able to contribute to the joint development of weapons. It is very possible that he meant China. His words about "allies around the world" also sound like a call for the restoration of some former ties, or rather, to benefit from relations with those who have maintained good relations with Moscow since Soviet times.

It is known where these "points" are in the world. One of them, of course, is Cuba, which the United States has always considered a direct or at least a potential threat. Despite all efforts, Washington has failed to change the regime in Cuba.

There are other potential allies in Latin America, such as, for example, Venezuela.

Africa decided to completely boycott the West's call to turn away from Russia, and none of the African countries supported the sanctions or even condemned Russia's actions.

Besides China, Russia can count on some other Asian allies. Among them, of course, is North Korea, and just today it was announced that Putin and Kim exchanged letters calling for strengthening cooperation in various fields. There is also a military junta in Myanmar, which has been working to strengthen relations with Moscow since coming to power.

What exactly does Russia offer? Today, Putin visited an arms exhibition near Moscow and said that Russia is still "many years ahead of competitors" in the field of advanced weapons.

"Russia sincerely values historically strong, friendly, and truly trusting ties with the states of Latin America, Asia, and Africa. I am ready to offer allies and partners the most modern types of weapons from small arms to armored vehicles and artillery, combat aircraft and unmanned aerial vehicles," the Russian president said and stressed: "Almost all have been used in real combat operations more than once."

He also said that Russia is ready to offer new models and systems. "We are talking about high—precision weapons and robotics, about combat complexes based on new physical principles," Putin said. "Many of them are years, or maybe decades ahead of their foreign counterparts, and significantly surpass them in terms of tactical and technical characteristics."

A very interesting proposal that will undoubtedly interest many. All potential buyers are now, of course, watching the conflict in Ukraine, and Russia, if it wants to increase its export sales, must "prove itself" there.

Some Western military analysts are confident that due to the conflict in Ukraine, Russian arms sales to some major customers, such as India, may decrease. Why? Probably, this will happen if the Russian promotion "stalls".

No matter how brutal and tragic the fighting may be, from the point of view of arms import and export, this is only a demonstration of "products". Moreover, in the conditions for which this "product" is purchased. If it turns out that Russia is unable to move forward, but at the same time claims that its weapons are "years and decades ahead of competitors," then such statements will be considered empty. Moreover, even her army can be considered a paper tiger. After all, everyone who closely follows the fighting in Ukraine, and potential buyers of Russian weapons are especially attentive, understands that Russian advancement is necessary in the expected areas — where the largest number of Russian population lives.

Although the United States is not actively involved in this conflict, it still effectively demonstrates its weapons, especially the advanced Haimars systems. So, recently they have been presented as a weapon that "stopped the Russian army." Many will agree that this is a big "advertisement" for American weapons.

As it always happens, most of all, weapons manufacturers profit from the war. Someone will say that this is one of the reasons that there is always at least one war in the world. Today, Europe is massively getting rid of its old weapons, emptying warehouses (a considerable part of it was Russian and even Soviet-made) and sending it to the Ukrainian front. This means that large purchases of new and modern weapons will follow, and these are incredible profits that this industry will receive for many years to come.