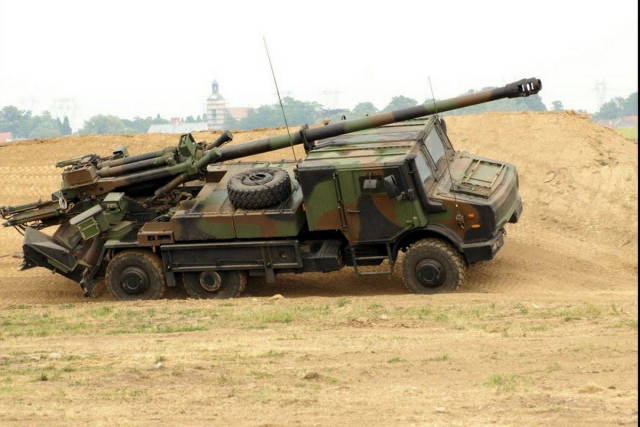 TSAMTO, January 18. The Brazilian Army Command plans to analyze the national and international markets as part of a project to purchase 155 mm self-propelled howitzers on a wheeled chassis (VBCOAP 155 mm SR).

As reported by Infodefensa.com, for this purpose, the command has published a corresponding request for information. The aim of the project is to supply a total of up to 36 artillery systems capable of quickly and effectively hitting targets at ranges up to 40 km.

The project is expected to attract the interest of several foreign companies specializing in the production of self-propelled howitzers. Two of them have already demonstrated their products in Brazil. Among them are the Israeli Elbit Systems and the French Nexter Group.

Nexter offers the CAESAR SG (Camion Equipe d'un Systeme d'artillerie), which is the main system of barrel artillery in France, and has also been adopted or acquired by more than eight countries of the world, the last of which was the Czech Republic. CAESAR is placed on the chassis of Sherpa 5/6A with a 6x6 wheel formula and Tatra T815-7 with an 8x8 wheel formula.

In turn, Elbit Systems offers SG ATMOS (Autonomous Truck Mounted howitzer System), which is currently in service with nine countries. ATMOS can be placed on a platform with a 6x6 or 8x8 wheel formula and equipped with 155-mm/39, 155-mm/45 or 155-mm/52 caliber guns, various fire control systems. When equipped with a 155-mm gun with a 52-caliber barrel length, the maximum firing range of a long-range active-rocket projectile with a bottom gas generator (ERFB-BB) is 41 km. The ACS can fire all standard NATO ammunition.

According to the Brazilian defense industry, AVIBRAS can also offer a new artillery system on the chassis of the Astros Mk MLRS.6, developed in collaboration with the French Nexter.