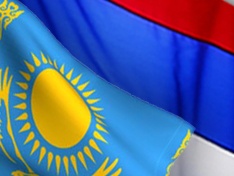 During the training, the servicemen will work out the transition to the collective rapid reaction forces, as well as the preparation and conduct of reconnaissance and search operations in isolation from the main forces

YEKATERINBURG, August 31. /TASS/. Joint company tactical exercises with the participation of more than 500 servicemen of Russia and Kazakhstan started at the Kara-Haak training ground in the Republic of Tyva. This is stated in a message distributed on Tuesday by the press service of the Central Military District (CVO).

"During the exercise, the servicemen of the two countries will work out the issues of transition to the collective rapid reaction forces, as well as the preparation and conduct of reconnaissance and search operations in isolation from the main forces using Orlan-10 unmanned aerial vehicles and Mi-8 AMTSH helicopters. In addition, with the use of armored vehicles "Tiger" and "Typhoon", as well as self-propelled artillery installations "NONA-SVK", the servicemen will have to perform joint tasks to destroy conditional bandit groups that have invaded the territory of the union state," the message says.

It is specified that the special feature of the exercise will be the use of a pack-transport unit, which will act as part of a mobile fire group to deliver heavy grenade launchers and mortars to hard-to-reach mountain heights. This is necessary for further fire support of the defending collective rapid reaction forces and the destruction of a conditional enemy.

The main objectives of the exercises are to improve practical skills in the destruction of terrorist gangs, to work out interaction between units, as well as to develop a unified plan for conducting combat operations.

The exercises will last until September 4, more than 500 servicemen and about 150 units of military equipment will take part in them.