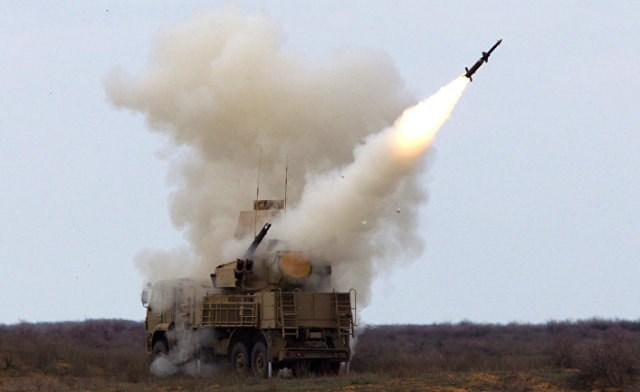 As a result of the attack, there are no casualties and destruction, said the deputy head of the Russian Center for reconciliation of the warring parties in Syria, Rear Admiral Vadim Kulit

MOSCOW, August 20. /TASS/. The Russian-made Syrian air defense systems Buk-M2E and Pantsir-S destroyed 22 of the 24 guided missiles fired by Israeli Air Force fighters at the Rif Damascus and Homs provinces on August 19. This was reported to journalists by the deputy head of the Russian Center for Reconciliation of the warring parties in Syria, Rear Admiral Vadim Kulit.

He noted that on August 19, at about 23: 00, six tactical fighters of the Israeli Air Force from Lebanese airspace struck 24 guided missiles at targets on the territory of the Syrian Arab Republic in the provinces of Rif Damascus and Homs. "The Syrian air defense forces on duty destroyed 22 missiles from the Russian-made Buk-M2E and Pantsir-S complexes in service with the armed forces of the SAR. There are no losses among the Syrian servicemen and no destruction of infrastructure facilities, " Kulit said.

Earlier, the Al Hadath TV channel reported that the Israeli Air Force attacked on Friday night the neighborhoods of Damascus and Homs, where there are camps and warehouses with weapons of the Shiite Hezbollah units fighting on the side of the Syrian army. According to the TV channel, rocket attacks on ground targets were carried out from Lebanese airspace. Syria's air defense systems opened fire on air targets over Damascus and Homs. As the SANA news agency reported, citing a military source, " Syrian anti-aircraft gunners hit most of the missiles." On August 17, the Israeli Air Force attacked the positions of the Syrian army and pro-Iranian Shiite formations fighting on its side in the southwestern province of Quneitra. On July 22, attacks were carried out on warehouses with weapons and ammunition of the Shiite militia Hezbollah in Al-Qusayr in the south of the province of Homs.

In response, Damascus called on the UN Security Council to " hold Israel accountable for its aggressive actions against Syria, which have become more frequent recently." The statement of the Ministry of Foreign Affairs of the Arab Republic stressed that "Syria will not hesitate to exercise its legitimate right to defense and protection of national sovereignty in full accordance with the UN Charter."

The rights to this material belong to ТАСС
The material is placed by the copyright holder in the public domain
Страны
Израиль
Иран
Ливан
Россия
Сирия
Продукция
96К6 Панцирь-С1
Бук-М2
Компании
ООН
Do you want to leave a comment? Register and/or Log in
Log in via Facebook
The Permanent Representative of the Russian Federation to international organizations in Vienna Ulyanov called the refusal of AUKUS to provide data on the union abnormal
The United States agrees with Stoltenberg on the inadmissibility of Russia's influence in the issue of NATO expansion
In the USA, it was proposed to ban "Solntsepeki" and "Pinocchio"
Putin signed the law on the powers of Roscosmos in the field of infrastructure construction
Korean aircraft carrier "won back" funding
Конфликты: Йемен - "забытая" война
The National Interest (США): российский танк Т-80 — это не шутка
In the USA, they were surprised by the size of the Su-75
Russia will offer India the technology of the Octopus tank
Шойгу счел необходимым построить в России еще несколько крупных городов
The State Duma appreciated the idea of banning the sale of grenades after the shooting at the MFC in Moscow
British military demanded $1.1 million for stuttering after Estonian frosts
Sasapost (Египет): американцы создают самый мощный лазер в истории. Что это значит?
Tank killer: the work of the PTKM-1R anti-roof mine was shown on video
Корпорация "Иркут" до конца 2018 года поставит ВКС РФ более 30 истребителей Су-30СМ
other topics discussed
2006-2021 © ВПК.name. All rights reserved.
When reprinting, link to ВПК.name required.
User agreement.
№ 21-PP in the register of information distributors.
18+
Website hosting: TimeWeb.