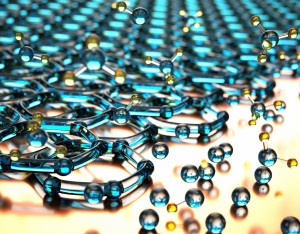 Researchers at the Cambridge Graphene Center have shown that graphene can be used to create ultra-high-density hard drives, providing a tenfold leap over current technologies.

The study, published in Nature Communications, was conducted by British specialists in collaboration with their colleagues from India, Switzerland, Singapore and the United States.

Hard drives, which have been widely used in personal computers since the mid-1980s, have become smaller in size, but significantly more spacious during this time. Although they are being squeezed by solid-state drives, hard drives are still popular because of their lower cost.

The increase in volume is associated with an increase in recording density, in turn, provided by the improvement of two key components: the plates and the head. In particular, developments that allowed to reduce the gap between them.

Currently, a significant part of this gap is occupied by carbon-based coatings-layers designed to protect the plate from mechanical damage and corrosion. Since 1990, the recording density has increased fourfold, and the coating thickness has decreased from 12.5 nm to about 3 nm. These parameters correspond to a density of 1 terabyte per square inch.

The Cambridge researchers replaced the coatings currently used with graphene (one to four layers) and tested friction, wear, corrosion, thermal stability, and compatibility with lubricants. It turned out that, in addition to its unsurpassed fineness, graphene has all the ideal properties of an external coating for hard drives in terms of corrosion protection, low friction, wear resistance, hardness, compatibility with lubricants and surface smoothness. It reduces friction by half and provides better protection against corrosion and wear than modern solutions. In fact, a single layer of graphene reduces corrosion by 2.5 times.

The scientists also tried out locally heated media recording (HAMR), a new technology that allows for increased storage density. Unlike graphene, the coatings currently used do not work at the temperatures required for HAMR. Graphene combined with HAMR is said to increase the write density to an unprecedented level of more than 10 terabytes per square inch.

How soon the development will come to serial HDDs, scientists do not say.

The rights to this material belong to Время электроники
The material is placed by the copyright holder in the public domain
Страны
Великобритания
Индия
Сингапуp
США
Швейцария
Проекты
ИТ
Do you want to leave a comment? Register and/or Log in
Log in via Facebook
The Permanent Representative of the Russian Federation to international organizations in Vienna Ulyanov called the refusal of AUKUS to provide data on the union abnormal
The United States agrees with Stoltenberg on the inadmissibility of Russia's influence in the issue of NATO expansion
In the USA, it was proposed to ban "Solntsepeki" and "Pinocchio"
Putin signed the law on the powers of Roscosmos in the field of infrastructure construction
Korean aircraft carrier "won back" funding
Конфликты: Йемен - "забытая" война
The National Interest (США): российский танк Т-80 — это не шутка
In the USA, they were surprised by the size of the Su-75
Russia will offer India the technology of the Octopus tank
Шойгу счел необходимым построить в России еще несколько крупных городов
The State Duma appreciated the idea of banning the sale of grenades after the shooting at the MFC in Moscow
British military demanded $1.1 million for stuttering after Estonian frosts
Sasapost (Египет): американцы создают самый мощный лазер в истории. Что это значит?
Tank killer: the work of the PTKM-1R anti-roof mine was shown on video
Корпорация "Иркут" до конца 2018 года поставит ВКС РФ более 30 истребителей Су-30СМ
other topics discussed
2006-2021 © ВПК.name. All rights reserved.
When reprinting, link to ВПК.name required.
User agreement.
№ 21-PP in the register of information distributors.
18+
Website hosting: TimeWeb.