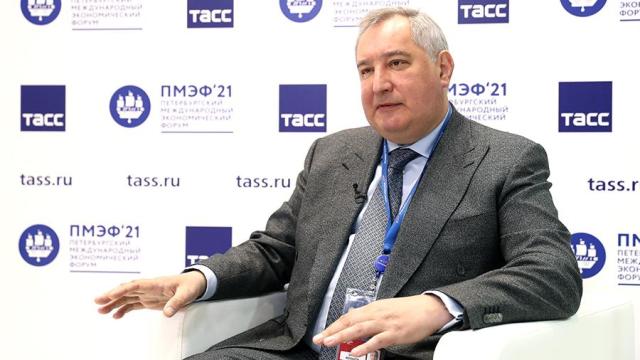 The head of Roscosmos, Dmitry Rogozin, said on Thursday, June 3, that the preliminary design of a promising Russian orbital service station (ROSS) will begin in Russia before the end of the summer.

Rogozin said that in the near future, a report with a roadmap for the creation of the ROSS will be sent to the Cabinet of Ministers.

The head of Roscosmos also noted that the main experiments will be conducted not inside the station, but on the outer board.

"In other words, the station is, in fact, a platform for spacecraft, and we are going to cover the station for observation and retransmission," he said in an interview with TASS on the sidelines of the St. Petersburg International Economic Forum (SPIEF — 2021).

Rogozin said that the inclination of ROSS will be 97-98 degrees. The station will pass through the entire Earth every two days, while in the Arctic region it will be located every hour and a half. According to him, it is important to support the Northern Sea Route.

"That is, there is a much greater pragmatism of this station, we would like to create such a station, "the head of Roscosmos added.

The next day, the Deputy Prime Minister warned that the deterioration of the ISS could have serious consequences, including a catastrophe. According to him, Russia is able to independently finance the ROSS project, but is ready to invite foreign partners to cooperate.

On April 20, Rogozin noted that the launch of the first base module for the new Russian space station should be provided in 2025. A day later, he announced that the Science and Energy module (NEM), which was created for the ISS, will be redesigned for use on ROSS.

At the same time, on June 2, Russian cosmonauts Oleg Novitsky and Pyotr Dubov, who are on the ISS, completed their work in outer space. It was noted that the astronauts replaced the replaceable panel of the liquid flow regulator on the Zarya module, and the Mission Control Center (MCC) confirmed its operability. They also prepared the Pirs module for separation from the ISS.

The rights to this material belong to Известия.ru
The material is placed by the copyright holder in the public domain
Страны
Россия
Компании
Роскосмос
Персоны
Борисов Юрий
Рогозин Дмитрий
Проекты
Арктика
МКС
Do you want to leave a comment? Register and/or Log in
Log in via Facebook
The United States agrees with Stoltenberg on the inadmissibility of Russia's influence in the issue of NATO expansion
The Permanent Representative of the Russian Federation to international organizations in Vienna Ulyanov called the refusal of AUKUS to provide data on the union abnormal
In the USA, they were surprised by the size of the Su-75
In the USA, it was proposed to ban "Solntsepeki" and "Pinocchio"
Putin signed the law on the powers of Roscosmos in the field of infrastructure construction
Korean aircraft carrier "won back" funding
Конфликты: Йемен - "забытая" война
The National Interest (США): российский танк Т-80 — это не шутка
Russia will offer India the technology of the Octopus tank
Шойгу счел необходимым построить в России еще несколько крупных городов
The State Duma appreciated the idea of banning the sale of grenades after the shooting at the MFC in Moscow
British military demanded $1.1 million for stuttering after Estonian frosts
Sasapost (Египет): американцы создают самый мощный лазер в истории. Что это значит?
Tank killer: the work of the PTKM-1R anti-roof mine was shown on video
Корпорация "Иркут" до конца 2018 года поставит ВКС РФ более 30 истребителей Су-30СМ
other topics discussed
2006-2021 © ВПК.name. All rights reserved.
When reprinting, link to ВПК.name required.
User agreement.
№ 21-PP in the register of information distributors.
18+
Website hosting: TimeWeb.