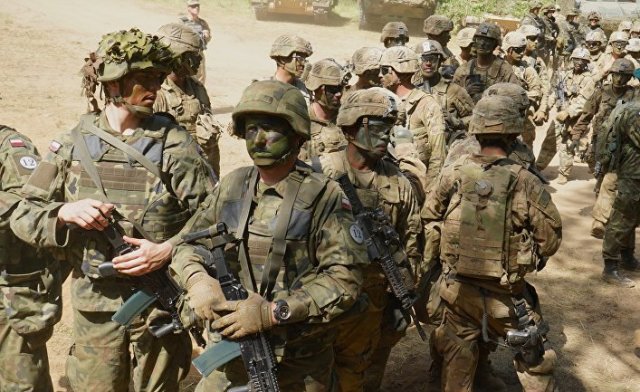 The Russian exercises near the Ukrainian borders have excited everyone. But the giant NATO exercises "Defender of Europe-21", sometimes taking place very close to the borders of Russia, for some reason do not bother anyone. NATO, led by the United States, wants to take Russia into the ring. It is a shame that Sweden is also following their lead, the author believes.

Russia has ended military exercises near the border with Ukraine and withdrawn its troops. This was followed by one of the largest US - led exercises in Europe in decades-and they are clearly directed against Russia. But do not even expect that they will be as much written about in the press as about the Russian ones.

Recently, the Swedish news has been talking a lot about "Russian aggression" along the Ukrainian border, and the less attention is paid to the huge exercises of the militant NATO alliance led by the United States. The exercise is called "Defender of Europe - 21". And they are aimed specifically at Russia-mainly with an emphasis on the Black Sea. The ability to quickly transfer NATO troops to the east is also being worked out. Ukraine is participating in the exercise.

Since March, American troops have been constantly arriving in Europe, and preparations are underway to redeploy troops in Germany and other countries. In total, more than 30 thousand military personnel from 27 countries will work out their participation in the war in more than 30 regions of Europe. The exercises will last until June.

Last year, the Defender of Europe exercise was supposed to include the largest transfer of troops from the United States to Europe in 25 years, but it had to be greatly reduced due to the coronavirus pandemic. And this year, the maneuvers were even expanded. This will be one of the largest US-led exercises in Europe in decades.

Within the framework of the Defender of Europe-21, several related maneuvers are combined: "Quick Response" includes air operations in Estonia, Bulgaria and Romania, which will involve more than 7 thousand military personnel from 11 countries. The "Immediate Response" involves more than 5,000 military personnel from eight states, who will train in 31 training areas in 11 different countries, and Saber Guardian involves more than 13,000 soldiers from 19 countries.

The exercises take place against the backdrop of the constant expansion of NATO to the east and the desire of the United States to take Russia into the ring. "Defender of Europe provides us with the best opportunity to hone our joint actions with partners and allies in the strategically important Balkan-Black Sea region to adequately respond to any potential crisis, " said Christopher Cavoli, commander of US forces in Europe and Africa.

Defender of Europe is also directly linked to two other exercises that will be held simultaneously and partly with the same composition of participants: the African Lion, the annual maneuvers of US troops in Africa, during which 5,000 troops will go primarily to Morocco, and the Staunch Defender, a series of NATO exercises that "focus on the ability to send transatlantic reinforcements to Europe" and demonstrate NATO's ability to respond quickly to a range of threats. So says the press release.

Some of the participating countries allow the United States to deploy its troops closer to Russia, and this clearly illustrates that the deliberate advance of NATO to the east is a reality, and not at all disinformation or Russian propaganda, as Swedish Television correspondent Bert Sundström and others like him assure us.

In the Balkans, Croatia and Albania became NATO members in 2009, Montenegro in 2017, and North Macedonia as recently as last year. Romania and Bulgaria have been members of NATO since 2004. Last year, the Pentagon reported that 11.9 thousand US troops were transferred from Germany to strengthen the south-eastern borders of NATO.

$ 130 million of the US military budget for 2021 (amounting to a total of $ 740 billion) is intended for the modernization of the Campia Turzii air base in Romania in order to make it an important NATO hub in the Black Sea region.

But we don't hear anything about the US and NATO aggression against Russia in the news. As well as the fact that the United States is increasing its military presence in Europe, although this is exactly what is happening.

Joe Biden's Defense Secretary, Lloyd Austin, said this week that the United States is sending 500 more troops to Germany, where 34.5 thousand Americans are already stationed. And two weeks ago, Norway signed a treaty that gives the United States the right to establish military bases at four Norwegian airports. At the same time, the Norwegian government is convinced that this treaty does not contradict the previous political course, according to which Norway does not allow other countries to establish bases on its territory in peacetime.

"Any American military activity in Norway will continue to be the fruit of close coordination between Norway and the United States," the government wrote in a statement. Defense Minister Frank Bakke - Jensen also underestimates the significance of the treaty in an interview with the news agency Norsk Telegrambyrå: "This agreement is the modernization and development of those agreements and areas of cooperation that we already have with the United States. This is important for Norwegian security within NATO."

Sweden's treaty with NATO on the deployment of troops, approved by the Swedish parliament in 2016, implies that the United States and NATO will be able to use Swedish territory to wage war against Russia. In response to this decision, Defense Minister Peter Hultqvist last year announced the restoration of regiments in Falun and Sollefteo to protect NATO troops.

"This is about defending the transport routes from Trondheim that can be used in a crisis situation, "Hultqvist told Swedish Television in a rare burst of unequivocal candor.

What about Trondheim? Tanks and other weapons for 15 thousand American Marines, which will be resorted to when the situation escalates.

And who really threatens whom? Who is the aggressive side in all this?

To hear Hultqvist and parrots like Bert Sundstrom, it's Russia and Vladimir Putin. But all the facts show that the aggressors are the United States and NATO, which are advancing their positions towards Russia,and not vice versa. It's a shame that Swedish politicians are obediently following them, turning Sweden into a target during a supposed war with Russia.

And other than the time Hultqvist accidentally made a slip of the tongue, we'll never hear about it.

The rights to this material belong to ИноСМИ
The material is placed by the copyright holder in the public domain
Original publication
InoSMI materials contain ratings exclusively from foreign media and do not reflect the editorial board's position ВПК.name
Страны
Албания
Болгария
Германия
Македония
Марокко
Норвегия
Россия
Румыния
США
Украина
Хорватия
Черногория
Швеция
Эстония
Персоны
Путин Владимир
Проекты
NATO
Военные учения
Do you want to leave a comment? Register and/or Log in
Log in via Facebook
The Permanent Representative of the Russian Federation to international organizations in Vienna Ulyanov called the refusal of AUKUS to provide data on the union abnormal
The United States agrees with Stoltenberg on the inadmissibility of Russia's influence in the issue of NATO expansion
In the USA, they were surprised by the size of the Su-75
The National Interest (США): российский танк Т-80 — это не шутка
Korean aircraft carrier "won back" funding
Шойгу счел необходимым построить в России еще несколько крупных городов
The State Duma appreciated the idea of banning the sale of grenades after the shooting at the MFC in Moscow
British military demanded $1.1 million for stuttering after Estonian frosts
Sasapost (Египет): американцы создают самый мощный лазер в истории. Что это значит?
Tank killer: the work of the PTKM-1R anti-roof mine was shown on video
Корпорация "Иркут" до конца 2018 года поставит ВКС РФ более 30 истребителей Су-30СМ
Как России зарабатывать больше на продаже вооружений
Putin signed the law on the powers of Roscosmos in the field of infrastructure construction
In the USA, they called the advantages of the Russian "Sun"
Американский эксперт назвал пять мощнейших российских танков
other topics discussed
2006-2021 © ВПК.name. All rights reserved.
When reprinting, link to ВПК.name required.
User agreement.
№ 21-PP in the register of information distributors.
18+
Website hosting: TimeWeb.