Banned cluster munitions found during mine clearance in Stepanakert 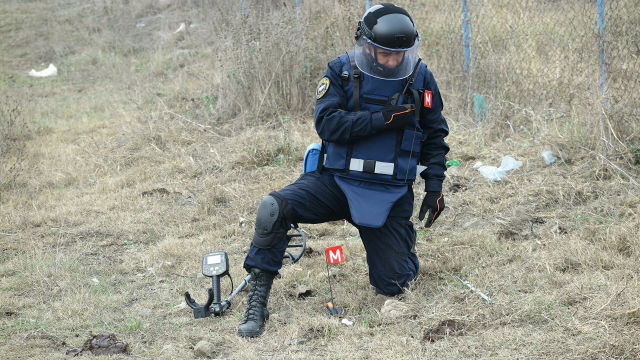 According to Lieutenant General Yuri Stavitsky, Russian sappers find a lot of abandoned ammunition and unexploded shells when checking the districts of Karabakh

MOSCOW, January 20. /TASS/. The M-85 cluster submunitions prohibited by international law were discovered by Russian sappers during the clearance of Stepanakert. This was announced on Wednesday in an interview with Rossiyskaya Gazeta by the head of the engineering troops of the Armed Forces of the Russian Federation, Lieutenant General Yuri Stavitsky.

"There are minefields of various types. In the city of Stepanakert, a particularly large number of unexploded M-85 Kolokolchik cluster submunitions were found, " he said.

According to Stavitsky, Russian sappers, when checking the areas of Nagorno-Karabakh, find a lot of abandoned ammunition and unexploded shells.

"We also had to face difficulties during the inspection of damaged gas pipelines, which had to be restored as soon as possible. <...> On the roads leading to the pipes, sappers found" tripwires" installed with the use of F-1 hand fragmentation grenades, a lot of unexploded shells, as well as shells in standard packaging, " said the head of the engineering troops.

He also noted that the clearance of the gas pipeline is complicated by weather and geographical conditions - some highways pass at altitudes of more than 2 thousand meters.

According to the Russian Defense Ministry, since November 23, Russian military engineers have cleared about 551 hectares of territory, 205.3 km of roads, 783 housing buildings, including 25 socially significant objects, of unexploded ordnance. In total, about 24 thousand explosive objects were found and neutralized, which were removed and destroyed at a specially equipped landfill.