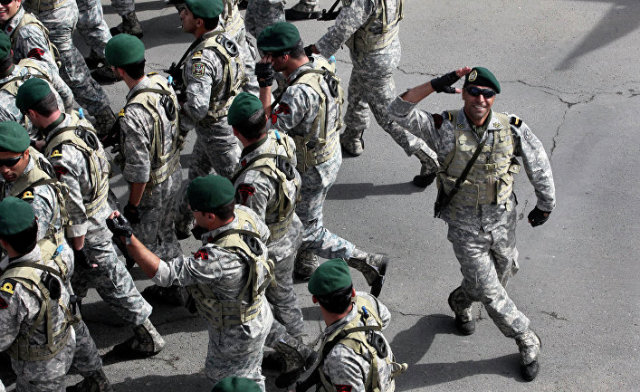 Iran on the eve of Biden's inauguration decided to demonstrate military power, according to the author, thus provoking Washington to further tension between the parties. According to news agencies, during the "demonstration" military exercises, drones were seen, the design of which aroused certain suspicions.

On the eve of the inauguration of US President Joe Biden, the commander of the Iranian ground forces, Kiumars Heidari, announced a large-scale military exercise in the Gulf of Oman. The upcoming military exercises will involve airborne brigades, special forces and rapid reaction forces.

This is the third military exercise in two weeks. They increase tensions between Tehran and Washington, as they take place on the eve of the inauguration of US President Joe Biden.

On Monday, January 18, Kiumars Heidari said that the 55th Airborne Brigade, the 65th Special Forces Brigade and the 223rd Rapid Reaction Brigade will take part in the military exercises "Eghtedar-99" with the transport and combat support of the Iranian Air Force and "Havaniruz" on the Makran coast. This was reported by the Iranian news agency Fars, which is considered close to the Revolutionary Guard.

He added that operations will be carried out to penetrate the surface and underground and advance to enemy naval targets.

On Saturday, January 16, Iran completed a two-day naval exercise in which it tested anti-ship ballistic missiles.

The Iranian military from the desert in the central part of the Iranian highlands successfully conducted training launches of anti-ship ballistic missiles at targets at a distance of 1,800 kilometers, the IRGC news agency Sepah News reports.

The drones are similar to those that attacked Saudi Aramco facilities

During the military exercises, drones were spotted, the design of which aroused certain suspicions. According to the Associated Press, they are similar to the Delta drones that attacked the Saudi Aramco oil refineries in Abqaiq and Hurais in September 2019. Recall that Tehran still denies involvement in the attacks on oil refineries in Saudi Arabia.

Yemeni Houthi rebels claimed responsibility for the attack on Saudi Aramco facilities. They also allegedly attacked the Saudi East-West pipeline in May 2019. All this looks like convincing evidence in favor of Tehran's involvement in these attacks.

Military exercises in the Gulf of Oman

Iran has a missile potential capable of causing serious damage to Israel and US military bases in the Middle East, as the range of Iranian missiles is 2 thousand kilometers.

Last week, the naval forces of the Iranian army conducted successful launches of short-range cruise missiles at the naval parade of the Islamic Revolutionary Guard Corps (IRGC) in the Gulf of Oman.

Iran has conducted large-scale exercises, during which it tested new ballistic missiles amid increased tensions with the United States.