TVP Info (Poland): Schroeder can say out loud what others are whispering about 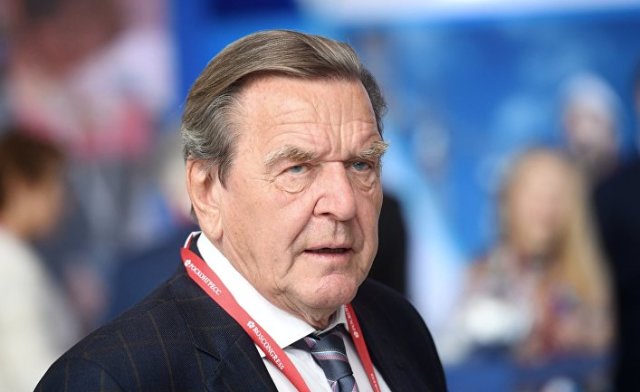 Former German Chancellor Gerhard Schroeder is convinced that NATO is a relic of the past, and the concept of "West" has lost its meaning. Schroeder believes that Europe should become independent. The implication is that Berlin should play the main role, but for this it will need a strong ally, and Russia is the ideal partner in this regard.

A new beginning in German

The North Atlantic Alliance is a relic of the past, the concept of "the West" has lost its meaning, and Europe should independently confront the United States and China - such theses are put forward by former German Chancellor Gerhard Schroeder. After leaving big politics, he was able to say out loud what others only whisper about.

Schroeder did not become, as it might seem, a political outsider. He continues to participate in public discussions, although the German establishment often criticizes him for working for Vladimir Putin and the Putin regime (receiving a substantial remuneration as chairman of the board of directors of Rosneft and Nord Stream 2 AG). Newspapers are willing to interview Schroeder and publish his analytical articles, because the ex-chancellor says something that current politicians cannot openly say. Unfortunately, his theses seem to be dangerous.

NATO is a relic of the past

In a recent interview with the Welt newspaper, Schroeder stated: "The transatlantic relationship that has existed for several decades is a thing of the past. Trump destroyed something that could not be saved in any case." The ex-Chancellor has already expressed this idea. Last November, in the pages of the Handelsblatt newspaper, he openly wrote that the paths of America and the countries of the" old European Union " parted in 2003, when American troops attacked Iraq, and significant changes in relations under Joe Biden should not be expected. "In the last four years, we have not seen a radical reversal, but only a continuation of the long - term transatlantic drift," Schroeder wrote.

In order to notice the crisis in NATO, a particularly deep analysis is not required, but the conclusions that Germany draws from the situation look alarming. Gerhard Schroeder in an interview with "Welt" says the following: "The Alliance completed its mission at the time of the collapse of the USSR, then it should have been dissolved or, at least, fundamentally restructured. That didn't happen. New members have emerged, and as a result, the NATO border has moved towards Russia." And further: "If Europe wants to withstand the pressure of the United States and China, it needs to become stronger in political and military terms." Therefore, Germany is not going to revive these relations, but to create a new system in which Europe (meaning, under the leadership of Berlin) will become one of the players in the political arena on a par with the United States and China.

In practice, this will lead to the severing of existing transatlantic ties and an attempt to create a new world order. This is very similar to the desire to undermine the British policy of the balance of power, which Prussia did not like so much before the First World War.

To achieve this goal, Berlin needs a strong and at the same time dangerous ally. The ideal partner in this regard is Russia, which supplies the necessary raw materials, needs modern technologies, craves international recognition, is not afraid to use force and considers the United States its main enemy.

The West does not exist

Arguing for the need to strengthen the alliance with Moscow, the former chancellor says that the division between East and West no longer exists, everything has become relative. "The West was a military, economic and ideological response to the East," he says in an interview. Schroeder condemns, however, the annexation of Crimea, but at the same time notes that it was a reaction of Russia to the aggressive policy of the North Atlantic Alliance, which sought to encircle the Russian state.

These words not only sound offensive to the Ukrainians, who had the right to be guided by their own interests, declaring their desire to join NATO, but also look like an ominous omen for the whole of Central Europe. Schroeder makes no secret of his belief that Moscow has the right to pursue an aggressive policy towards its neighbors. This is a return to the concept of "near abroad", which implies a restriction of the sovereignty of neighboring states with the Russian Federation.

If such rights are granted to Russia, why not to Germany in the future? One can already see how much influence German politics has on the internal affairs of Central Europe or the Balkans. This is usually done through European institutions, but more and more often the need to adjust the domestic political course of Poland, Hungary, Romania or Greece is directly discussed by German politicians.

Moreover, in the official statements of the German government, Berlin acts as a representative of the whole of Europe. Speaking about building relations with Washington under the new American administration, the head of the SPD faction in the Bundestag, Timon Gremmels, said in November last year: "The Federal Government urgently needs to discuss the topic of Nord Stream 2 with the United States. President-elect Joe Biden is also an opponent of the gas pipeline, but he is interested in constructive cooperation with Europe. This chance should be taken advantage of."

One could say that this is just a manifestation of the arrogance so characteristic of German politics, but the problem is deeper. Nord Stream 2 is a political project that aims to give Germany and Russia control over the energy market in Europe (at least in Central Europe). The project causes a lot of controversy among the Germans themselves, because it serves to support the authoritarian regime in Moscow, but the federal government, despite the American sanctions and the protests of the countries of our region, is making every effort to complete it. "What kind of European sovereignty is this, if it means the fulfillment of everything that Washington wants," German Foreign Minister Heiko Maas asked at the end of December 2020.

We once again see how the interests of Germany are equated with the interests of the whole of Europe, although the European institutions do not provide the Nord Stream 2 project with political support. It is becoming increasingly clear that the goal of Berlin's policy is to gain the role of hegemon. Alas, not for the first time in history.