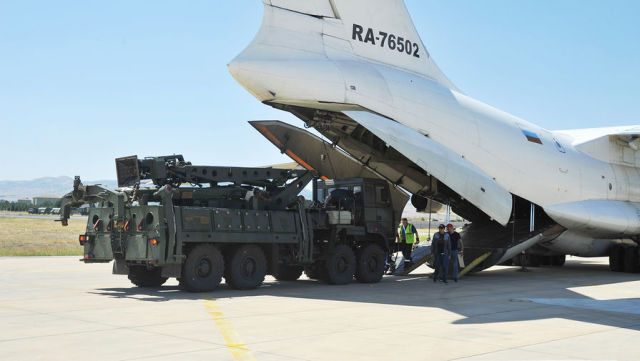 It is important for Turkey to produce its own S-400 anti-aircraft missile systems, said Ismail Demir, President of the country's Defense Industry Department. According to him, Ankara will buy a second set of this type of weapons from Moscow only on condition of technology transfer.

"If we wanted to, the second set of S-400s would have arrived today, but we need joint production and technology transfer," he said.

Demir noted that the S-400 air defense systems already purchased by Turkey from Russia are ready for operation and will be used if necessary.

Former Deputy Commander - in-Chief of the Air Force for the Joint Air Defense System of the CIS member States Aytech Bizhev said about the security of such a deal with Ankara, reports NSN.

"The Turks bought the complexes on trial, realized that there is no more reliable and better. First, they want to learn how to make them during co-production, and then they will buy a license and build them themselves. We do not fully disclose the secret of production, this is a limited technology. So there is no threat to national interests. It was also with China, this form of interaction is not new, " the general said.

Demir himself has been under US sanctions since December 14 last year. In accordance with the restrictions imposed, the United States prohibits the issuance of licenses and export permits for SSB. In addition, the assets of Demir and other officials of the department located in the United States were frozen.

However, the head of the ministry assured that Turkey will remain committed to its goal, maintaining the full independence of its defense industry.

"Any decision made against me or our department abroad will not change my position or the position of my team. It will not be able to interfere with the Turkish defense industry in any way, " he stressed on Twitter.

In June 2019, the press secretary of the President of Russia Dmitry Peskov reported that the delivery of the S-400 air defense system to Turkey also involves a partial transfer of technologies.

"The contract implies a partial transfer of technologies to production. Partial, " the Kremlin spokesman commented on the words of Turkish President Recep Tayyip Erdogan about his interest in the contract.

Earlier, Erdogan during a meeting at the G20 summit in Osaka with Russian leader Vladimir Putin said that the agreement on the supply of S-400 is extremely important for the country.

"I also want to note that [the contract] is of priority importance for us, for our cooperation, first of all, joint production of missiles, including technology transfer," Erdogan stressed, noting that there are no delays in the delivery of SAMs.

Turkey intends to buy S-400s from Russia until the Turkish military-industrial complex is able to produce these weapons itself, Foreign Minister Mevlut Cavusoglu confirmed at the XIV International Strategic Forum in Bled in September of the same year.

"[The purchase of the S-400 will be carried out] until we can produce our own [similar SAMs].

If we manage to buy an analog from the United States, we will buy the Patriot air defense system. But if this fails, we will buy another S-400 from Russia, Turkey is an independent country, " the head of the Turkish foreign Ministry said.

The contract between Moscow and Ankara for the supply of S-400 was signed in December 2017. This was Russia's largest contract with a NATO member country. In total, Russia has supplied Turkey with four divisions of air defense systems worth about $ 2.5 billion. 55% of them were covered by a Russian loan, explained to the newspaper" Kommersant " General Director of Rostec Corporation Sergey Chemezov.

The S-400 system is designed to destroy all modern and advanced means of air and space attack (including hypersonic). In Russia, it was adopted on April 28, 2007.

The early detection radar provides a monitoring range of up to 600 km. S-400 missiles can hit low-flying targets at an altitude of 5 m.