For the first time since the concept of a solar-thermal rocket (jet) engine appeared, engineers created a working prototype of it. Despite the fact that this installation is only to confirm the concept, it proves the possibility of practical implementation of this idea.

The first journalists to visit the experimental facility in Maryland [...] were employees of Wired. The prototype was assembled by engineers from the Johns Hopkins University applied physics Laboratory (JHUAPL). According to the description of witnesses, the device does not make a particularly strong impression — an ordinary ISOcontainer in the back yard of the campus. Inside there is an array of LEDs, which bears the proud name "solar simulator".

A black-and-white tile is placed opposite it, through which liquefied helium flows. The gas passes through the coil and escapes from a small nozzle. When you turn on the "sun simulator", the tile is irradiated with light twenty times more intense than it comes from our star (at what distance — not specified). This radiation is converted into heat, which is transferred to helium. And that, in turn, creates jet thrust. 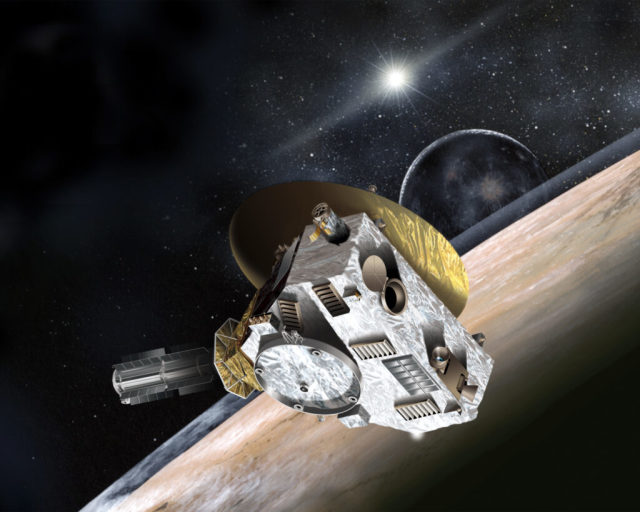 Artistic representation of the flight of the new Horizons probe past Pluto and Charon. Only five man-made vehicles have overcome the attraction of the Sun and gone beyond our system. New horizons is one of three companies that are still in contact with and the only one that actively performs research

It sounds simple, but this is the first time such an installation has been tested for performance. It does not yet have anything that can be applied on a real interplanetary probe, but the principle of operation corresponds to the concept. The light heats a special screen, the heat is transferred to the gas, the gas performs work in the jet nozzle. The purpose of the experiment is to confirm that this makes sense and the efficiency of the installation will be higher than with the banal evaporation of helium.

So far, scientists from JHUAPL do not give any specific figures, only the result — the system worked. More detailed results will be published in 2021. At the end of next year, it is planned to summarize the results of the decade of Heliophysical research at the National Academy of Sciences, engineering and medicine of the United States. The solar-thermal jet engine demonstrator was developed by order of NASA as part of the preliminary study of the interstellar research probe project. 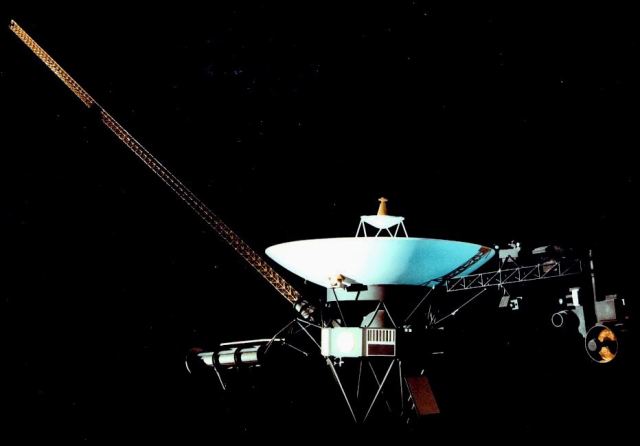 The Voyager probes look the same and carry an identical set of instruments on Board, but were sent on different routes

In the entire history of space exploration, humanity has been able to reach the limits of the Solar system with only two vehicles. And only within the framework of a side program of missions, and the very fact of reaching the borders is questionable. It is too difficult to judge what the edge of the star system is based on the readings of probes sent on a flight 43 years ago. Especially if they force us to reconsider some details of existing theories of the structure of the Solar system.

In any case, Voyager 1 and its twin brother Voyager 2 were intended to explore the distant planets of Jupiter, Saturn, Uranus, and Neptune. To date, they have spent almost half a century in space, their radioisotope power and heat sources are no longer able to provide energy for scientific equipment. Finally, it took them almost three decades to reach the outer limits of the Solar system. Future probes to explore these areas of space should be much faster. 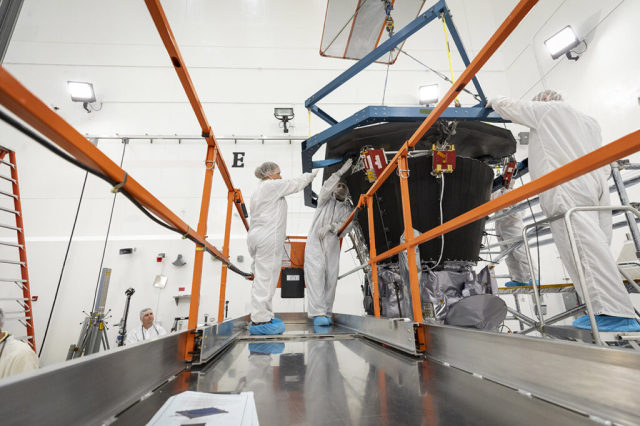 Installing a heat shield on the Parker probe in 2018. A little over two weeks after this image, it set off on a complex trajectory towards the Sun

One of the possible ways to accelerate so much can be a solar-thermal jet engine powered by hydrogen. Its use is perfectly combined with the gravitational maneuver at the star. Flying just 1.6 million kilometers above the solar corona, the interstellar probe will get the necessary heat to vaporize the gas and create thrust, as well as an additional boost due to the Obert effect. This will allow you to get the necessary speed increase for the success of the mission - from 48 to 320 thousand kilometers per hour.

In theory, everything looks doable. You just need to solve the problem with the heat shield, which will have to withstand a temperature of almost 2.5 thousand degrees. The good news is that the maximum approach will last only two and a half hours. The bad news is that hydrogen adds problems, which at high temperatures is capable of very unpleasant reactions with most materials. Engineers and scientists at Johns Hopkins University have found theoretical solutions to most of the difficulties and are now working on their practical implementation.

The idea of a solar-thermal rocket engine was expressed in 1956. By orderof the us air force rocket propulsion laboratory (AFRPL), calculations and ground tests of the materials necessary for the implementation of such an installation were even carried out. However, only now has progress reached the necessary level for such experiments to be successful. In practice, the solutions created at JHUAPL will be tested, including when the Parker probe approaches the Sun in 2024. This device during its operation will be at a distance of only four times greater than the interstellar probe will have to "survive".

The rights to this material belong to Naked Science
The material is placed by the copyright holder in the public domain
Страны
США
Проекты
Медицина
Do you want to leave a comment? Register and/or Log in
Log in via Facebook
The Permanent Representative of the Russian Federation to international organizations in Vienna Ulyanov called the refusal of AUKUS to provide data on the union abnormal
The United States agrees with Stoltenberg on the inadmissibility of Russia's influence in the issue of NATO expansion
Putin signed the law on the powers of Roscosmos in the field of infrastructure construction
Korean aircraft carrier "won back" funding
Конфликты: Йемен - "забытая" война
The National Interest (США): российский танк Т-80 — это не шутка
In the USA, they were surprised by the size of the Su-75
Russia will offer India the technology of the Octopus tank
Шойгу счел необходимым построить в России еще несколько крупных городов
The State Duma appreciated the idea of banning the sale of grenades after the shooting at the MFC in Moscow
British military demanded $1.1 million for stuttering after Estonian frosts
Sasapost (Египет): американцы создают самый мощный лазер в истории. Что это значит?
Tank killer: the work of the PTKM-1R anti-roof mine was shown on video
Корпорация "Иркут" до конца 2018 года поставит ВКС РФ более 30 истребителей Су-30СМ
Как России зарабатывать больше на продаже вооружений
other topics discussed
2006-2021 © ВПК.name. All rights reserved.
When reprinting, link to ВПК.name required.
User agreement.
№ 21-PP in the register of information distributors.
18+
Website hosting: TimeWeb.