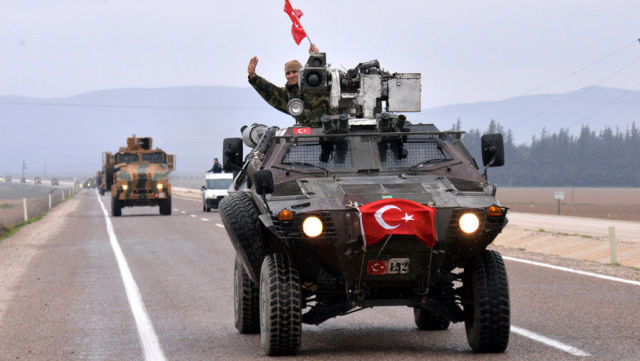 The Turkish Parliament has adopted a Memorandum by President Recep Tayyip Erdogan on sending troops to Azerbaijan. Turkey will set up an observation post in Azerbaijan, from which it will use drones to monitor compliance with the ceasefire in Karabakh. On November 18, the Federation Council will consider the use of the Russian Armed forces abroad, which may also be related to the peacekeeping mission in Karabakh.

A Memorandum on the transfer of Turkish troops to Azerbaijan was adopted at the General Assembly of the Grand national Assembly of Turkey on November 17.

Turkey will set up an observation post in Azerbaijan, from which it will monitor compliance with the ceasefire in Karabakh with the help of drones operated by Turkish officers, Haberturk reports.

Speaking at the consideration of the bill, the Deputy from the nationalist PARTY iyi Ahat Andikan, among other things, said that Azerbaijan's victory in Karabakh helped put a barrier to the"great dreams of Armenia".

MP from the peoples 'Democratic party Tulay Hatymogullary Oruc said that Turkey says" no " to military actions in favor of dialogue, peace and political settlement of foreign policy issues.

On the same day, Senator Vyacheslav Timchenko said that the Federation Council on November 18 will consider the use of the Russian Armed forces abroad, this may be related to the peacekeeping mission in Nagorno-Karabakh, RIA Novosti reports.

The day before, Turkish President Recep Tayyip Erdogan sent a decree to the Parliament for consideration.

"The center will have military personnel and, if necessary, civilian specialists. The center's work will be aimed at ensuring peace and stability in the South Caucasus in the light of steps to ensure the territorial integrity of Azerbaijan, which is reflected in the relevant resolutions of the UN security Council and the OSCE," the document said.

Commenting on what is happening, the press Secretary of the President of the Russian Federation Dmitry Peskov pointed out that this decision is an internal matter of Turkey.

"There will also be a monitoring center on the territory of Azerbaijan, where you need to send the Turkish military-this is the implementation of internal procedures," the Kremlin representative said.

At the same time, it is known that Washington and Paris are asking Moscow to clarify the conditions for a complete cessation of hostilities in Karabakh, as well as to detail the role of Turkey in the agreements. This was stated by high-ranking representatives of the state Department. A transcript of their speech at a briefing for journalists was distributed by the us foreign Ministry.

"They talked a lot about Nagorno-Karabakh. As two co-chairs of the [OSCE Minsk group], they [France] share the same view as we do - we remain committed to our role as co-chairs in the [peace] process of the Minsk group," the us diplomats said.

The foreign Ministers of the United States and France acknowledged the actions taken by Russia that led to a ceasefire that has been in place for about a week.

At the same time, the heads of the state Department and the French foreign Ministry stressed that they still have a large number of questions that require clarity from Russia regarding the parameters of this agreement, including the role of Turkey, in order to get more information on the situation.

"[Pompeo and Le Drian] noted that Russia invited the co-chairs to Moscow to [bring] more clarity, and as you probably saw on the news, there were telephone conversations between the co-chairs, " the foreign Ministry said.

According to the trilateral agreement between Moscow, Baku and Yerevan, the Azerbaijani and Armenian sides will remain in their positions, and Russian peacekeepers will be deployed to the region.

We are talking about 1960 military personnel with small arms, 90 armored personnel carriers, 380 units of automobile and special equipment. As Russian President Vladimir Putin specified, peacekeepers are introduced for five years with automatic extension for the next five-year periods.

This extension will be canceled if one of the parties declares its intention to terminate the application of this provision at least six months before the expiration of the period.

Turkey will only participate in the work of the joint Russian-Turkish center for monitoring the ceasefire in Nagorno-Karabakh. On November 11, Erdogan announced that Ankara and Moscow signed a Memorandum on the creation of such a center.

As Peskov clarified, this monitoring center will be located on the territory of Azerbaijan. According to a Kremlin spokesman,"there was no talk of a joint peacekeeping force."

The rights to this material belong to Газета.ru
The material is placed by the copyright holder in the public domain
Страны
Азербайджан
Армения
Россия
США
Турция
Франция
Компании
Минoбороны РФ
ООН
Персоны
Путин Владимир
Эрдоган Реджеп
Проекты
БПЛА
ОБСЕ
Do you want to leave a comment? Register and/or Log in
Log in via Facebook
The Permanent Representative of the Russian Federation to international organizations in Vienna Ulyanov called the refusal of AUKUS to provide data on the union abnormal
The United States agrees with Stoltenberg on the inadmissibility of Russia's influence in the issue of NATO expansion
In the USA, they were surprised by the size of the Su-75
The National Interest (США): российский танк Т-80 — это не шутка
Korean aircraft carrier "won back" funding
Шойгу счел необходимым построить в России еще несколько крупных городов
The State Duma appreciated the idea of banning the sale of grenades after the shooting at the MFC in Moscow
British military demanded $1.1 million for stuttering after Estonian frosts
Sasapost (Египет): американцы создают самый мощный лазер в истории. Что это значит?
Tank killer: the work of the PTKM-1R anti-roof mine was shown on video
Корпорация "Иркут" до конца 2018 года поставит ВКС РФ более 30 истребителей Су-30СМ
Как России зарабатывать больше на продаже вооружений
Putin signed the law on the powers of Roscosmos in the field of infrastructure construction
In the USA, they called the advantages of the Russian "Sun"
Американский эксперт назвал пять мощнейших российских танков
other topics discussed
2006-2021 © ВПК.name. All rights reserved.
When reprinting, link to ВПК.name required.
User agreement.
№ 21-PP in the register of information distributors.
18+
Website hosting: TimeWeb.